Checking In From High Above The Biters

This may be a bit scattered today - I'm kind of all over the place, helping corral survivors towards the safe zone, keeping the infected away from the north gates. All in a day's work.

I'm going to start my own little horror hall of fame here soon. Been wanting to for ages, but I've been distracted with all sorts of non-horror business. The hall of fame itself will be my own tribute to those who have made horror enjoyable for me. Many of my choices will coincide with others' choices, some may not - hard to say at this point. It's just something I want to do for fun and respect to the genre I love.

Take a peek over there to the right and down a little. See those other horror blogs and such? Take some time and visit them. Many of them are by friends I have made since I decided to take my horror fandom to the Intra-webs. These are good, creative people who put out some real awesomeness out there. So go take a look, you won't be sorry!

Among the things suffering because of my scatterbrained ways in recent weeks is my movie-viewing pace. I did manage to sneak in a viewing of Sion Sono's Exte: Hair Extensions. This bizarre, creepy, and oddly humorous Japanese offering centered mostly around -- you guessed it -- hair extensions. Dig this: You got this bizarre, Jame Gumb-wannabe morgue attendant named Yamazaki. 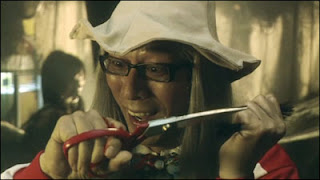 ...Yamazaki. Distant cousins?
Seems Yamazaki has an intense hair fetish, clipping it off of corpses and often crafting hair extensions to sell when he isn't displaying/rolling in them at home. Oh, and he steals a corpse to take home when he notices it growing hair in the morgue. He thinks, "hey, free hair factory." You also have sweetly innocent Yuko (played by Gogo from Kill Bill, Volume 1 - Chiaki Kuriyama), a novice hairdresser at a busy salon. Yuko has her own subplotline wherein she "inherits" her young niece, Mami, from her abusive, hosebag sister. Their paths cross as Yamazaki creepily stalks both Yuko and Mami because they have perfect hair. Meanwhile, he's selling extensions from the corpse, and that's not exactly going well. At least not for the ladies who wear the extensions, who have visions of the dead girl's end and die from hair-related chaos. 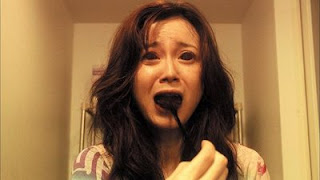 If all that doesn't put you off hair extensions, I don't know what would. Well, just don't buy them from a creepy guy presenting them to you in an old bird cage.

Things go from bad to worse as Mami is taken back to Yamazaki's house, and Yuko goes to save her. Yamazaki's in heaven since there's all this hair, and now he has his two perfect specimens at his disposal. When he tries to cut Mami's hair, well, it all falls apart - and for him, literally. The ending had a plausible reason, and a moment where I laughed out loud - kind of a "what the hell did I just see?" sort of laugh.

One of these days, I promise I'll get to The Red Shoes - maybe even tonight. But you know I've made and not delivered on that promise before, so I'll see what cards I'm dealt.