There have been a lot of factors that lead to my love of the horror genre. Everything from my fascination by the original "Kolchak: The Night Stalker" series to collecting ghost stories contributed something along the way. It's no secret that I have an affinity for apocalyptic revenant or infection fiction. You know, that unstoppable juggernaut of disease that might only spare a few lucky sociological experiments. However, it doesn't take away from my love of supernatural fiction, especially when it involves ghostly, often abandoned, locales.

I may have always been enamored with abandoned places, especially businesses or even spookier, services like hospitals or - gulp - asylums. I don't know. I have always imagined what history they had - they're ghosts with walls. But I can trace back to an adventure on wintry night in Northville, Michigan, when it took root in my subconscious for good.

One of my very best friends, Keith, lived near Detroit and often told us tales of childhood shenanigans. One such set of shenanigans involved sneaking into an enormous complex of abandoned buildings that were once the Wayne County Training School for Feeble-Minded Children. Yeah, you read that right. Try getting away with that kind of name these days. Or don't, because it's not cool. But back in the 1920's, that's what passed for a serious name. To Detroit residents, it was known by the much shorter, much more politically correct, "The Tunnels." This name was a result of the method by which one gets around in there without being detected: the steam tunnels connecting all the major buildings. 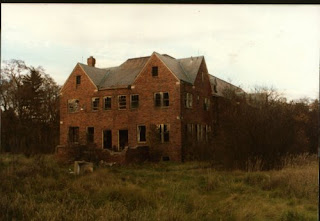 One weekend, Keith and I were joined by Ric, another of my very best friends and roommates, and made the trip to Keith's home for the weekend. There, we met up with Jim, Keith's childhood friend who knew The Tunnels like the back of his hand. It was a dreary, hazy winter night. Snow on the ground, slight rain glossing it with an icy sheen. We weren't even there yet, and it was surreal.

The first thing we did was hide from a train. Talk about a bunch of grown men acting like kids in the 1940's, we were that. Plus, we were going into an area that was forbidden. To get caught at that time was a substantial fine for trespassing. We had no intention of vandalizing anything, but the police don't care. Approaching through the woods, we found the first building and in that strange night, our flashlights and the fuzz-toned moon in the sky the only source of light, it looked like ghostly past and post-atomic future all in one.

My mind reeled. I got scared. And then I fell in love.

Old buildings with rust and brick and decay and graffiti, derelicts beached by history. I imagined: what was their purpose? What kind of person worked or lived inside the walls? What ghosts remained?

Jim took us inside the first one, then down into the tunnels themselves. Cramped, we could only go single file in the absolute and pure darkness. There was real danger. Maybe Jim didn't know every nook and cranny of the place. And there were a lot of those. Gangs had been known to frequent the place. We'd heard tales of an LSD-riddled girl trapped down there for who-knows-how-long. When Ric's flashlight started flickering, it was icing on the adrenaline cake. 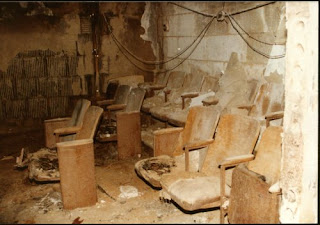 The everyday trappings of society were everywhere, too. There was a bowling alley in the activity center. We found a pool. A theater. Rooms, beds, desks, even canisters filled with food in the fallout shelter. It was like we'd found a place frozen forever in time, aided by the cold winter air. So quiet, too. Only our voices and the wind, and that was fairly calm.

We saw some other things, too. A blue light moving past a set of windows. Looked at straight on by all of us. No road nearby, so it wasn't headlights. It may have been something entirely innocent, but we've always liked to think it was something else. There was also ominous, telling, and often hilarious graffiti. One scrawled message blurted out "Hail Satin!" I guess we were to praise fabric.

It was a real adventure, almost like the kind The Goonies have, only much less dangerous and marketable. But the images I came away with have stuck with me for years since then. I still dream of underground tunnels, ghostly feelings, and empty places. They aren't nightmares. They're sleep gold.

Much like the horror genre binds many of us as friends, the thrill of The Tunnels binds anyone who visited them. They're gone now, but those who experienced it even once still talk about it. As a wrestling insider in Detroit for a few years, all I had to say was "remember The Tunnels?" and it became a campfire story-fest backstage. Keith, Ric, and I still talk about it to this day. And we toast the memory of Jim, who passed away several years after. He was a really, really good guy.

The abandoned asylum and good friends. The rush of doing something we shouldn't and seeing things that were pieces of history. There is no doubt it contributed to my horror palate.

Thanks for reading this long post, fellow survivors. See you next time...
Posted by Dod at 10:21 PM