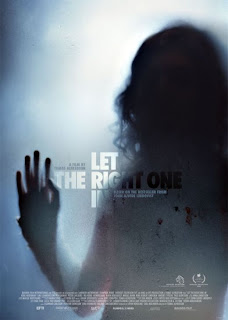 So I finally landed the helicopter and got around to watching Let The Right One In, a very different and striking coming-of-age vampire film from Sweden directed by Tomas Alfredson. After the shining reviews it received from every reputable horror movie site out there, I just had to see it...and I'm glad I did.

It was a beautiful piece of work, photographed and shot in such a way that it lulls you into a sense of peace and quiet. There's no peace for our beloved protagonists, and something dark and animalistic lurks in that quiet.

A little autobiographical tidbit first: I lived in Sweden for a year as an exchange student in 1983 and 1984. I had the time of my life...learned a new language, met some great friends, and as a country boy, fell in love with a big city in Stockholm. Let The Right One In takes place in 1981, not far off from when I was there. I went through waves of nostalgia upon seeing the architecture, hearing the language, seeing the mystique that was early-80's Sweden for me.


What's it about? Meet Oskar (Kåre Hedebrant), a bullied 12-year-old who, despite being a gentle soul, collects grim newspaper clippings and practices knife fights on a tree. He's relentlessly bullied at school by Conny (Patrick Rydmark) and his cronies. No one is there to defend him. One night, a strange little girl (more androgynous, really) named Eli (Lina Leandersson) appears in the playground of their apartment complex. They strike up a conversation, and instantly are drawn to each other. Their mutual loneliness brings them together, more sensed than spoken. After several meetings, Eli convinces Oskar he needs to stand up strong for himself and never back down to Conny again. It's no mystery to us, the audience, at this point that Eli is a vampire. Her helper, Håkan (Per Regnar) is constantly foiled in his search for blood to feed her. Yes, he takes it (or tries to) from innocent people, but neither he nor Eli is evil. It's how she feeds, and like many vampires, she didn't choose this "un-life." Häkan dies trying to protect Eli's identity, but the pieces are in place for her to be found out. When Oskar stands up violently to Conny, the pieces are in place for Conny and his older brother to take cruel revenge. What occurs in the bathhouse during the climactic scenes is nothing short of chilling.

Let The Right One In is beautifully filmed, the Swedish winter never looking so gorgeous. The performaces out of Leandersson and Hedebrant are amazing - these two carry the film like seasoned pros. Of course, since this movie was so good on several levels, it's being remade in the United States. Yeah, I know. I wish they'd pull the brakes on "kneejerk remakes," too.

This movie is rated R here in the US of A, so please: DO YOUR RESEARCH if you think it has even an inkling of something that might offend you. In fact, that's one of my main mantras: DO YOUR RESEARCH! Horror fans know what they're getting into...newcomers to the genre, occasional dabblers, not always so much. If in doubt, look it up.

OK, no more soapbox way up here in the sky. There's a gap in the zombie horde on I-75, so watch your step through there and I'll be back on the air again soon.


(Edit: You'll have to excuse the rushed tone of this post. It was written in parts over several days, even at work...ssssh. I'll make better attempts at being more lively in the future.)
Posted by Dod at 1:49 PM