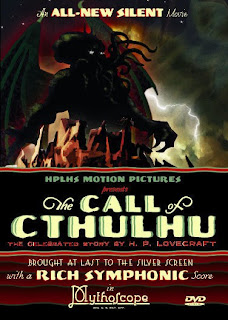 I've been a fan of H. P. Lovecraft's stories and mythology for some time, I have to admit. His style of writing - obviously termed "Lovecraftian" - has influenced countless writers, including yours truly. A story I once wrote for a writing class at Florida State called "To Walk Again On Wicked Ground" was directly influenced by ideas he brought forth. On a much grander scale, one can see Lovecraftian nuances in the wonderful (I think, anyway) Cloverfield. So, when I heard about the short film, The Call of Cthulhu, and how it was presented, I had to post it high on the ol' Netflix queue.

Made in 2005 and distributed by the H. P. Lovecraft Historical Society, it's filmed in black and white (a technique they call Mythoscope) with only a musical score for sound. It's based on Lovecraft's short story that bears the same name and is pretty faithful to it, with a few changes here and there. I gotta say, the changes didn't bother me all that much. I took this film as a 47-minute chunk of fun that pays respect to the source but carves out an identity of its own through its sheer imagination.

In the film, a man in an asylum relates a story to his therapist about delving into a mystery that his great-uncle investigated before dying. He traces clues that show a relation between a massive earthquake, a murderous cult, an artist's disturbing dreams, and a horrifying incident that claimed the lives of sailors on a mysterious, uncharted island. When the man reads the diary of the only man who survived the incident, a Norwegian sailor named Johanssen, the horror of what is on the edge of the world is revealed bit by bit. The ancient Old One, known as Cthulhu, had awakened and just the sheer knowledge that it's out there drives the main character mad. 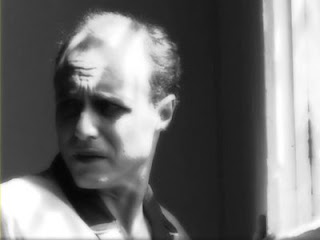 That was always the hook for me in Lovecraft's fiction. What was there, but not seen. He hints at things, but rarely ever shows them. Many characters go insane just from seeing a fraction of what monsters lie on the other side of a very thin wall between dimensions. It isn't in-your-face horror. It's sneak-up-on-you-and-blow-your-mind horror. Madness and horror go hand-in-hand...read a little Lovecraft and see how.

Almost scarier than that group of zombies I just saw surrounding the library downtown. Keep clear of that, if you can. Maybe they'll move on. In the meantime, I'll go land this bird and get ready to watch the next horror film in my stack, George A. Romero's 1973 film, The Crazies.
Posted by Dod at 10:03 PM