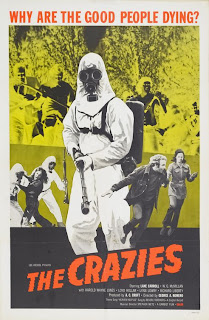 So, who are "the crazies"? The townies, poisoned by tainted water stemming from the crash of a military plane carrying "Trixie," a biological weapon? The scientists, stretched thin from trying to find a cure while madness surrounds them? The military, charging in with little remorse or organization to shut down an innocent Pennsylvania town? When you watch The Crazies, George A. Romero's first major film after Night of the Living Dead, that's the three-headed question that arises: who really are the crazies named in the title?

After a long day of aerial observation of the zombie apocalypse, I settled in to watch this 1973 film. It has long held cult status among horror fans, but I hadn't seen it until now. Being a Romero fan, I owed it to myself to see it. And, honestly, it was a lot different than I thought it'd be.

Characterization is right on from the start, which is always something one must do to tell a story. After a prologue in which an insane man kills his wife off-screen, threatens his children, and sets his house on fire, we meet David (W. G. McMillan) and Judy (Lane Carroll), a couple that for some reason, made me think of a Ramones song. Alas, but Judy is no punk here. She is the pregnant nurse love interest of ex-Green Beret fireman David, and we learn much about them in the first few minutes. Their stories split for a time as Judy finds a frenetic scene at her workplace as the military has suddenly appeared to account for a crashed plane that held a biological weapon. David and best friend Clank (Harold Wayne Jones), a former high school football star who harbors some jealousy of David, tend to the fire but soon find themselves on the run when Judy makes a break from the hospital on orders from her boss, who fears for her safety. 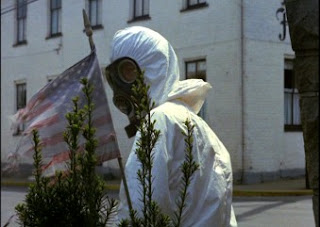 The town is cordoned off and townspeople are rounded up to be held in the high school. The military seems unemotional, and the image is boosted by their white haz-mat suits and gas masks. They are faceless and in a way, voiceless as each of them sounds the same (a point David drives home when he poses as one of them later in the film). Many of the citizens are confused and defensive. After all, the military's coming into their homes and forcing them out. And really, how can you tell who has the disease and who doesn't when everyone's stretched to their limits? A-ha! Therein lies the rub!

The military brings in Dr. Watts (Richard France, who played the beleagured Dr. Rauch in Dawn of the Dead), who once worked on Trixie to find a cure. He's exhausted, bewildered, and angry at the red-tape workings of the "emergency," but he sets about doing what he's asked to do. Our trio of heroes is captured, but escape from a van with Artie (Richard Liberty, who was the delightful Dr. Logan in Day of the Dead) and his daughter, Kathy (the hauntingly pretty Lynn Lowry, a reigning queen of B-horror). They evade the troops, no easy task since Kathy is obviously sick and frantic and protective Artie isn't much better, finally holing up in a house after Clank kills all five of the soldiers there. His rantings afterward demonstrate that he is slowly succumbing to Trixie, but to his credit, he's fighting hard to resist it. 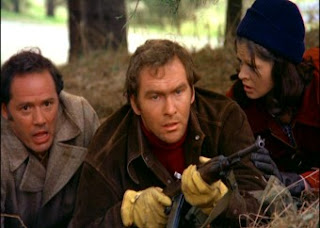 You'd think there'd be some rest here for our travelers, but no. Artie rants to Clank about protecting his daughter from the immorality in the world, but what happens the next morning is disturbing and horrible. Artie, delusional now, imagines Kathy is his dead wife and, well, assaults her. It's not graphic, but it is very hard to watch. Clank catches him and beats the living hell out of him before David stops him from going too far. Kathy wanders out into the field to play with the sheep, seemingly unaffected by what just happened...she's too far gone. Artie hangs himself. Before long, more soldiers show up and surround Kathy, who's gentle at first but becomes more deranged as the soldiers treat her with coldness and fear. She's finally and sadly gunned down as the sheep run past.

David and Judy escape, followed by Clank, who at first brawls with David, thinking he's trying to leave the poor schlub behind. Clank comes to his senses long enough to tell David to get Judy out of there, and stays to engage the oncoming soldiers. David and Judy get away, and Clank valiantly battles a throng of white haz-mat cannon fodder before his tragic demise.

Dr. Watts, after hours of research and failures, finally finds what could be a cure for Trixie. Overjoyed and impatient, he takes some samples with him and tries to leave the high school where the victims, infected or not, are being detained. The soldiers, in their infinite wisdom, think he's nuts and try to lock him in with the others. He gets away, but a stampede ensues and he dies in the chaos, along with the cure he found.

By the time David and Judy get to the edge of the guarded perimeter of town, Judy is showing signs of Trixie. She giggles, cries, and babbles - breaking David's heart, but he's determined to get her out of there. He builds a wall of concrete blocks around her and takes the high ground while the soldiers sweep past. Things go wrong, as David kills a couple of patrols while disguised as a soldier. Marauding townspeople begin firing on him and Judy, and Judy is hit, dying in David's arms. David kills a couple of the people, but spares the cop friend of his that claims he didn't recognize him or Judy. Could be true, but at this point, we don't know who's insane. We do know that David is immune, and he does too after an earlier discussion with Judy. Soldiers arrive again, and David goes without a fight. He's taken in, defeated yet defiant. The film ends with the reigning commander, Colonel Peckem, being airlifted out to tend to another possible Trixie breakout in Louisville.

Has the disease spread? Is this the end of the world? What becomes of the small town and its people? It leaves you to decide the answers to those questions, and that's the mark of a fine film if it's done gracefully.

The military at that point in history wasn't exactly seen as friendly or embraced since Vietnam was still fresh in the minds of the American public. Romero tended to present the military as belligerent, buffoonish, or at the most sympathetic, over-wrought and overworked. Those adjectives could describe different members of the military in the movie, and especially those that command them comfortably from armchairs far away. So, really, the military isn't the bad guy here, it's those in charge of them: the commander-bureaucrats, bewildered and constantly eating snack food.

* The woman using a broom in the field after a violent uprising.

* The poor priest, immolating himself as soldiers cart away the parishoners he tries to protect.

* The old lady and her knitting needles, providing a bloody greeting to a soldier clearing her house. 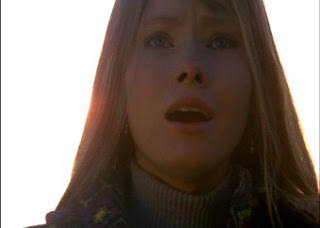 * Clank's sad end as a soldier's bullet finds his head and he struggles where he sits.

* The montage of soldiers invading homes, rounding up American citizens.

* David's smirk as he hears the Army lament the fact they hadn't found an immune human yet - he knows, but out of spite, he's not talking.

Well, time to go - certainly hope that Trixie doesn't exist...we have enough problems right now with this zombie plague. Time to land the chopper again and take a break. You all be careful out there - especially you, Mr. Netflix Delivery Guy. I need my movies.