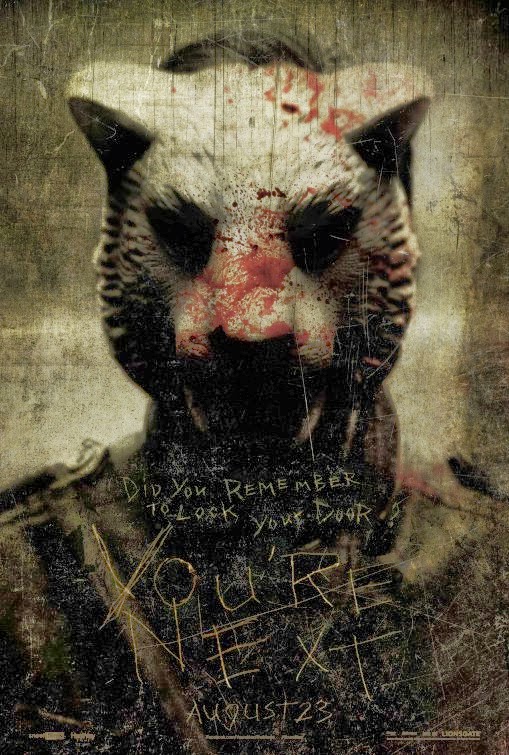 Yep, it was exactly as good as I thought it would be.

The home invasion subgenre of the horror film is extremely hit or miss.  Nice people in a house, bad guys break in, yadda yadda yadda, blood everywhere and maybe one nice person left alive.  It can be a formula, as most films are anyway, but when the filmmakers spice it up with snappy dialogue or strong characters or well-executed twists, it peaks my interest.

You're Next was made in 2011 and made the festival rounds before its wide release in 2013.  Written by Simon Barrett and directed by Adam Wingard, it's a well-paced, energetically creepy whodunnit with one of the best "final girls" in recent memory.

At a remote but opulent seasonal home, Paul and Aubrey Davison (Rob Moran and Barbara Crampton) prepare to welcome their children for an anniversary celebration.  It's a big home, still being renovated, and it makes lots of nice little bumps and creaks.  Crispian Davison (A. J. Bowen) and his Australian girlfriend Erin (Sharni Vinson) make their way to the home, and it's hinted at how dysfunctional the Davison family is.  Erin is happy to make the trip, though.  Once everyone is there, it doesn't take long for the dinner to break down into bickering, passive aggression, accusations, and...oh, yeah, a dinner guest getting a crossbow bolt in his forehead.  From there, it all breaks down as three men in farm animal masks begin picking off the family one by one.  With no leader stepping up, Erin rises to the occasion, trying to keep herself and the remaining family members alive.  And there's definitely more than meets the eye in regards to Erin, and in regards to the entire sticky situation.

The movie will take you on some twisty turns and one crazy-fun ride as you peel back more and more to find out the answers.  Everything fits in this movie, from the writing to the direction to the acting by a great ensemble cast of genre veterans and newcomers.  Bowen and Crampton are horror movie favorites, and the movie features appearances by producer/actor Larry Fessenden (I Sell The Dead), writer Barrett, director Ti West (The House of the Devil, The Inkeepers), and actor/director Joe Swanberg (V/H/S).  It's truly Vinson's movie, however, as she breaks out in her performance as Erin. 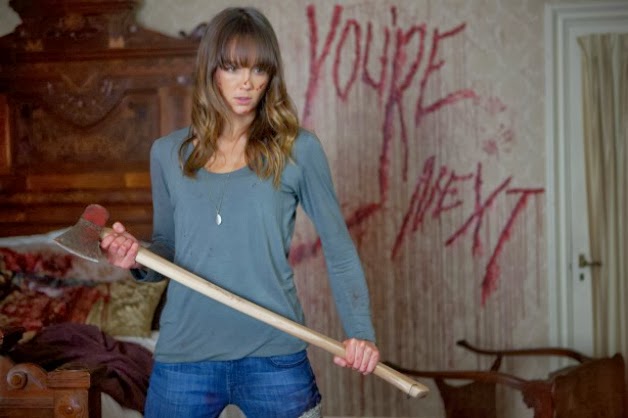 Like I said:  definitely a fun ride, and several notches above the usual home-invasion horror/suspense offering.  Fine acting and a truly suspenseful and often a tad gory journey through a night of terror, secrets, and boards with nails in them.

Now, here's the trailer to enjoy...