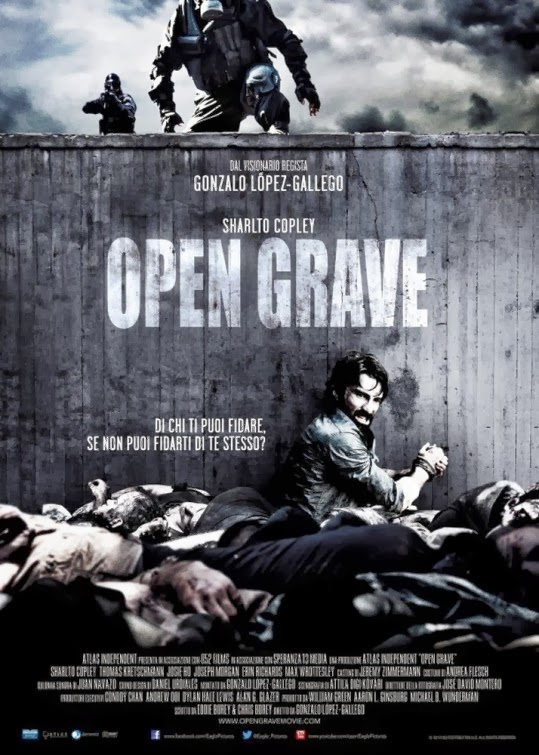 The "whodunnit" subgenre of mystery always holds possibilities for something fun.  From guessing the "who" to the "why," it's the next best thing in audience participation to actually being there.  And it's easy:  just keep watching or reading and the mystery will be solved.

The problem with reviewing whodunnits is accidentally revealing spoilers.  So, I'll do what I can, but I can only go so far.  Seriously, I can't even put the right labels on this blog entry without revealing what happens in the film, Open Grave.  Part of the fun is getting there, and slipping in a label that spoils it:  no fun. 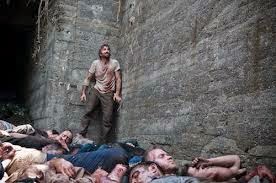 Open Grave was written by Chris and Eddie Borey and directed by Gonzalo López-Gallego (Apollo 18), and stars Sharlto Copely (District 9, The A-Team) as a man who suddenly awakens in a pit during a late-night thunderstorm.  Lightning flashes reveal the soft, squishy ground he's recovered on:  the pit is filled with dead bodies.  Before he can do a total freakout, and wracked with pain from some unknown cause, someone lowers a rope down and helps him out.  The man finds a house in the darkness, occupied by several other jumpy, rightfully paranoid people.  The thing is, no one knows who they are.  Their memories are pretty much wiped, although there is some instinct memory.  One of them knows how to load and reload a gun.  Another can speak Latin.  But all of them have no idea how they got to this house, why the pit is full of dead people, and how the puncture marks got on their arms.  Slowly, the group searches for clues and starts to realize that something is definitely not quite right.  In some areas, there are dead bodies bound to trees with barbed wire.  One of the group who presumes he was a soldier encounters an emaciated man trapped in a barbed wire fence - an encounter that goes south really quickly.

I can't go past this point without including clues that point toward the twists that make up the rest of the movie.  It goes in a direction I wasn't expecting, and that's not a bad thing.  All I can say is that it's an interesting take on a somewhat familiar scenario.  Clues come in, but it keeps you guessing until the revelation kicks in. 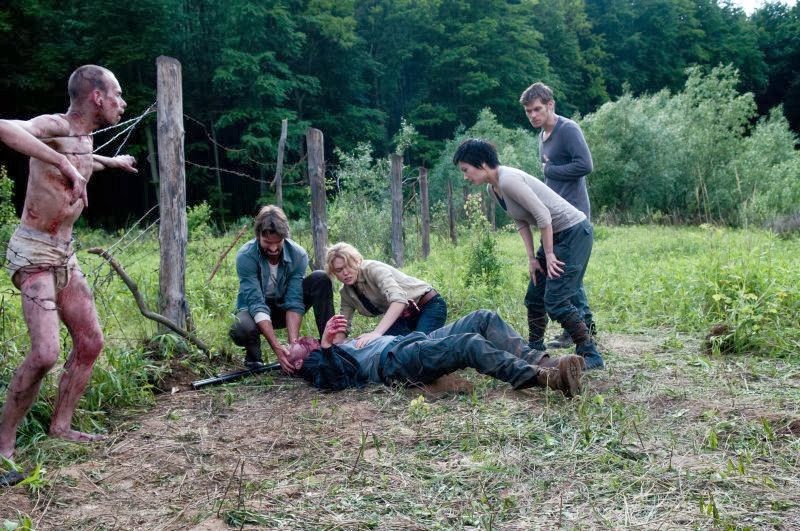 Despite a couple slow spots, and they really weren't even that slow, I found the story engaging and had some fun trying to put the pieces together.  The acting was very good, especially from Copely.  He's never disappointed me, and he is great in this.  Josie Ho, who plays the mute woman who also can't communicate in English, takes the ball and runs with it.  She provides clues and emotional insight with facial expressions and body language, connecting us to the movie without a word.  The movie just plain looks good as well.  I wasn't much of a fan of López-Gallego's previous effort, Apollo 18.  It wasn't horrible, but just didn't mesh with me.  Open Grave was more my flavor, and I found it worth the money to rent it.

So, you think you've had it weird when you wake up in a place you don't recognize, make sure you still have your memories.  Until next time, dear readers, check out the trailer...