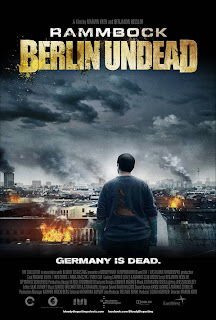 Clocking in at just over an hour, the German infection horror offering Rammbock: Berlin Undead offers some really good moments in what turned out to be a mostly decent little horror flick sponsored in the United States by the wonderful horror news website Bloody Disgusting.  It's a pretty straightforward story with basic undertones of longing and lingering loyalty.  No frills, as the story takes place in one location, an apartment building in Berlin that falls under attack by victims of a mysterious illness that causes them to become raving, mad-dashing, bitey zombie-ish thingies.

Milquetoast Michael is in Berlin to return keys to his very-recently-ex-girlfriend Gabi, who isn't home when he arrives.  He meets young plumber's assistant Harper just in time to witness the plumber working on Gabi's apartment turn into a frothing-at-the-mouth nutjob with milky eyes.  They get out of that situation, but quickly realize it's not just one rabid dude teeming with infection, but all of Berlin.  They hole up in Gabi's apartment, with Michael worrying about his ex - who hasn't returned his frantic phone calls - and Harper worrying about his family.  From the window, they watch as those in the courtyard are slaughtered, and meet other survivors through their own windows.  Michael sets about finding a way to a man's apartment after the man offers food in trade for some sedatives for his infected wife. This begins an odyssey through the next apartment and into the attic, where Michael finds one thing he's looking for, but it's not what he had hoped.  The rest of the movie is not only the struggle for survival, but Michael's own transformation from a relative wimp pining for his ex-girlfriend to a resourceful hero for those he meets on his journey to escape.  Not going to spoil it here for you, but the movie ends on a bittersweet note. 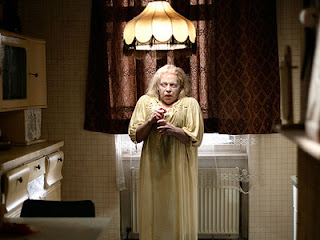 There's nothing fancy about Rammbock: Berlin Undead.  It tells its story, and tells it better than some vehicles for infection horror.  There's an air of urgency and hopelessness laced throughout, with signs of hope just enough to not make it a total downer.  As anyone who reads this knows, I liked to see the scale of devastation in these movies, even for a glimpse.  The scene where Michael casts his eyes on Berlin from a rooftop, as shown in the American movie poster, sums up the insane odds against anyone surviving the plague.  The infected - not sure if calling them undead is accurate, since we never really know if they die and come back - are of the fast-running, rabid variety, as seen in 28 Days Later and [REC], only with eyes that film over when infection fully occurs.  I found the characters intriguing from the main characters to the brother/sister across the way (a scene where she cries on the balcony is heartbreaking) to the silent tattooed man with what appears to be a bite on his arm.  The man who offered food and his infected wife have a particularly tragic scene.  While Rammbock didn't offer me anything new, it was tried and true, and sometimes that's just fine.

Honestly, it's not all that bad of a way to spend an hour if you're in the mood for some of your basic flash mob zombies.

Until next time, fellow survivors...no more flights to Berlin for a while.  Let the infection blow over.  Here, enjoy the trailer: