Insidious (2010) I Blinked And They Switched Movies 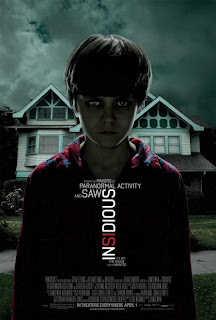 You know those dreams where in it, you're on a wild rollercoaster, twists and turns, dips and peaks, the best rollercoaster you've ever been on...and suddenly the dream switches, and you're in a bumper car far too small and you're the only one there not a unicorn driving the cars?

Or is that just me?

That's how I can describe my experience with 2010's Insidious, from the writer Leigh Wannell and director James Wan, the team that brought the world the very original Saw.  I was watching one movie when suddenly it switched to another, and I swear I only blinked.  The first three-fourths of the film was a creepy, atmospheric, and quite excellent haunting story built on the strong acting of Rose Byrne and Patrick Wilson.  The last act was, for me anyway, like that unicorn bumper car dream.  It seemed somewhat related to the rest of the movie, but didn't seem to fit.  Suspense and tension seemed to give way to super-powers and demons from the fringe of Hell.  Don't get me wrong:  combining super-powers and demons would make for a sweet movie, but it didn't seem to gel here.  Take those two elements, make two films featuring those traits, and you've got the potential for two outstanding movies.  As it is, Insidious combined the two and made one mostly good movie, in my opinion.

Josh and Renai Lambert (Wilson and Byrne) have moved into a new house, when strange things begin to happen:  weird noises, their oldest son Dalton being afraid of things in the house, and so on.  Dalton falls off a ladder in the attic while exploring and encounters something frightening.  The next morning, he doesn't wake up and even the doctors are puzzled, as all his tests are normal.  He's in a coma, but not any coma they've ever seen.  Three months pass and mysterious events happen again, increasing in intensity until Renai has a horrifying encounter with what can only be described as a ghost.  She insists they move, and they do.  However, the bizarre spirits follow them.  This time, Josh's mom (Barbara Hershey) calls in an old psychic friend Elise (Lin Shaye) to help determine not only why this is happening, but how it relates to Dalton.  Turns out Dalton's got himself a little super-power:  the ability to project his astral self with ease, and he's been lured too far from his physical body, leaving it open for bidding amongst the restless spirits.  I won't spoil how the rest of the movie goes, as secrets are revealed and a showdown with those spirits takes place in a netherworld known as The Further.  Needless to say, it's an abrupt change from the rest of the film, the way I saw it. 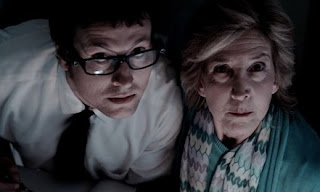 Now before anyone assumes I thought the whole thing was a mess, let me say this:  overall, it was not a bad film.  The acting is very good and the chills through the wonderful first three-quarters of the movie are genuine and well-executed.  The clues leading to the climax were placed well, and we're given great examples of foreshadowing and flashback.  The score by Joseph Bishara consists of both traditional music and jarring noises that lend an unsettling air to the proceedings, and "unsettling" is a good thing to shoot for in this style of film.  I pay attention to how the titles look, and I loved the old-school lettering of the title card. 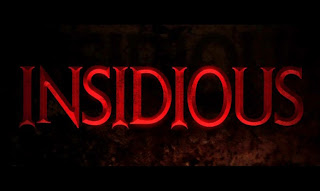 There were some moments that seemed borrowed or meant as a tribute to other movies, such as Poltergeist (which I'm sure the movie has been compared to, and that's not entirely fair to it) and The Haunting.  Something that struck me was the world of The Further.  I was often reminded of the bleak afterworld glimpsed at the end of Lucio Fulci's The Beyond (see my review of that film here), but with a little less light.  A character hurrying through The Further, lantern in hand, and seeing a house shrouded in pale light and fog reminded me a great deal of the video game series, Silent Hill.  These reminders may not have been intentional on the filmmakers' part, but I couldn't help seeing those other images in my mind as I watched.

Insidious was alright, and I urge people who have been wanting to see to go ahead and see it.  This is just one man's opinion, and really, I didn't hate it.  As I always say, judge for yourself.  Maybe you'll like it, maybe you'll hate it.  That's the beauty of individual tastes:  we all like things to different degrees, and it can make for healthy discussion.

Until next time, enjoy the trailer, and don't wander too far if you're good at astral projection.