The House By The Cemetery (1981) House-Sitting, Fulci Style 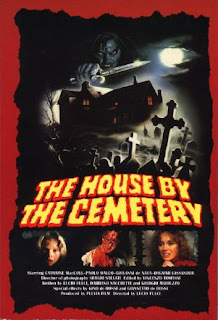 I always know with Lucio Fulci, I'm getting both the expected and the unexpected.

Fulci will always bring the weird, the technicolor-bloody, and quite often, some kind of eye trauma. I know I'm going to get atmosphere, perfect lighting (or perfect lack of), and a spooky soundtrack with slithering electronic sounds. But I never know exactly how Fulci is going to bring it to me. He might bring buckets and buckets of stomach-churning gore, like he did in City of the Living Dead. He might go with a bleak, atmospheric mind-twister like The Beyond (which was pretty gory in its own right).

With 1981's The House By The Cemetery, Fulci didn't disappoint in either the atmosphere or the gore factor. While not as in-your-face with the blood and guts like in the other two films I mentioned, Fulci doesn't short the viewer on mood and ambiance. There is that familiar feeling of dread, that itch that makes you want to look under your own bed for some monstrous Fulci creation that wants to eat your soft bits in order to live an unholy long life of some sort. While some of his other films like the aforementioned The Beyond and City of the Living Dead, as well as Zombi 2, get more attention, The House By The Cemetery is a little gem that deserves a piece of that attention pie.

Here, you've got a prologue featuring a woman wandering an abandoned house, searching for her previously amorous boyfriend before running afoul of a mysterious, knife-wielding person, who performs amateur acupuncture on her head before dragging her off. Cut to a little girl crying out a warning from a window in said house, seen in a photograph by little Bob (whose dubbed voice is...well, you have to hear it to appreciate it). Bob and his family, college professor Norman and his wife Lucy (Fulci regular Catriona MacColl), are in the process of moving into that same house. Seems Norman had a colleague who killed himself while living there, and he's going to finish the research project.

Moving in is easy, but weird. The townspeople seem to recognize Norman, no one wants to acknowledge who previously owned the house (a kooky doctor named Freudstein), and Bob makes friends with the little girl from the picture, Mae, who may or may not be a ghost. Even the babysitter (Ania Pieroni, the foxy Mother of Tears from Dario Argento's Inferno) is a little bit of an oddball. The house itself isn't much help either. There's a tombstone laid into the floor in one room, for crying out loud. Tell me that wouldn't put you off just a tad.

Upon investigating the previously nailed-shut basement (thanks for opening it, babysitter), the family is attacked by a very bite-y bat and that ends up being the guano that breaks the camel's back as Norman insists to the realtor that he wants his family moved to a different house. When the realtor visits later, she's attacked by the stabby guy from the prologue, only he uses a fireplace poker to give her an unwanted tracheotomy.

After dutifully cleaning up the blood, the babysitter's head is soon separated from her body while in the basement. It's around this time that Norman finds out a little more about this Doctor Freudstein, who conducted some funky experiments. Funky as in painful, deadly, and illegal. Bob takes it upon himself to go search for the babysitter in the basement, but meets Dr. Freudstein and despite Norman's best attempt at an axe-aided rescue, is carried off by the strange doctor. Turns out the doc has been "living" in the basement for some 150 years or so, killing people and using their parts to keep himself alive. That is, if his present state of half-decay is considered "alive." Norman and Lucy descend into the basement to save Bob, but are each killed by Freudstein. Bob makes it out in the nick of time, thanks to Mae, who accompanies him along with the spirit of Mrs. Fruedstein into an uncertain, but probably very bleak future.

Fulci relies much more on atmosphere in this one, but all you sickies out there will be pleased with the bat biting, head stabbing, neck poking, and maggot pouring the director throws into the mix. The creepy sounds, ghost appearances, and who's-there shadow play will satisfy the horror mood lovers out there. If you like Fulci, I don't doubt you'll like The House By The Cemetery. Made in the same vein as his "buildings on the gates of Hell" films, it's not in the same canon as those movies, but just like them, the menace hides and does its most terrifying work in a subterranean area. Fulci may hate eyes in some of his films, but he does love himself some spooky underground rooms and basements.

If you're looking to start watching Italian horror movies, you can do much worse than The House By The Cemetery. It's not the top of my own list, but it's definitely worth a look.

So, my fellow survivors, just remember: read the fine print next time you rent an old house. Trust me on this.