House on Haunted Hill (1959) Great Way To Be Snowed In

A solid eighteen inches of snow fell here during the night. I knew work would be canceled. I knew that after some shoveling, I would be sealed in for the day. There was no doubt in my mind I was going to sit and watch House on Haunted Hill. I was in the mood for something classic, something with Vincent Price, and something I knew I'd love. So as the sun set and I prepared to get back to the grind the next day, I propped up some pillows and kept the lights off. 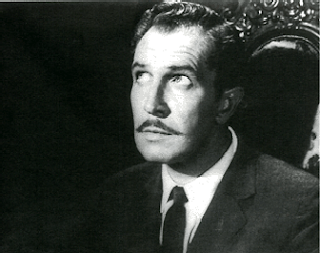 House on Haunted Hill came along during a time when gimmicks were called "gimmicks," and not "viral advertising." I admit that a lot of today's viral tricks and such can be quite creative: fake websites (Cloverfield), vinyl albums by a fake band (Fringe), and countless others. But back in the 50's, you couldn't just jump on the Internet. Computers were the size of rooms anyway. Legendary producer-director William Castle took what can be classified as a simple locked-room murder mystery, added some supernatural touches, created a classic gimmick for the film, and made it on a shoestring budget. Castle's been called a king of B-movies, but he made quality films full of meat and substance.


It's the story of a wealthy couple, Frederick and Annabelle Loren (Vincent Price and Carol Ohmart), who throw an expensive party for a group of strangers in a reputedly haunted house. Frederick and Annabelle aren't the picture of married bliss, however. They repeatedly trade barbs that seem jaunty and bored on the outside, but mask a true hatred for one another. The strangers come from all walks of life: a handsome test pilot, Lance (Richard Long); a pretty but easily rattled secretary, Nora (Carolyn Craig); a no-nonsense psychiatrist, Dr. Trent (Alan Marshal); a gambling gossip columnist, Ruth (Julie Mitchum); and an alcoholic, fearful man, Watson (Elisha Cook), who once spent a horrible night in the house. They apparently don't know each other, or the Lorens, but there they are, ready to spend eight hours in a deadly house for $10,000 apiece. Why they are there is anybody's guess.

It doesn't take long for the party to kick it up to levels rivaling my college days. We had ghosts and mysterious dripping blood on the ceilings, too.

The movie has one of those plots where to summarize it all would be to include spoilers, whether I want to or not. There are a few twists and turns, a little murder among strangers, some weird occurrences that add to the atmosphere of the movie. It was remade in 1999 with heightened effects and some added backstory - a decent effort, but created a mini-franchise that hasn't cast the best light on the original. Two glaring differences: the remake didn't have the "gimmick" and it didn't have Vincent Price.

The "gimmick" was a skeleton that would sail through the theater at just the right moment in the movie, and when you see it, you'll know about when that happens. To today's jaded audiences, it might be hokey, unless you count yourself as a real film fan, in which case it might be quaint or an honest-to-goodness tribute. It's been over 50 years since the original. The reaction it might have elicited then cannot be duplicated now, despite our love for it. Still, I would love to see it in action.

What can I say about Vincent Price that hasn't already been said by countless others? That voice, that delivery, that presence...he is easily one of my favorite actors of all time, and his name will pop up again and again in future installments of this blog. In this, he is one cool cat, equally friendly and treacherous, voicing concern for one character, then coldly insulting his wife the next. His performance, as well as Elisha Cook's, is worth the price of admission. Everything else is just a bonus.

The snow stopped falling, finally. It's going to be a pain to drive in tomorrow. But, I'm thankful it gave me the chance to get reacquainted with an old friend who used to haunt me on various creature features as a kid.

Plus, the snow keeps the zombies away, but that's neither here nor there.
Posted by Dod at 5:58 PM