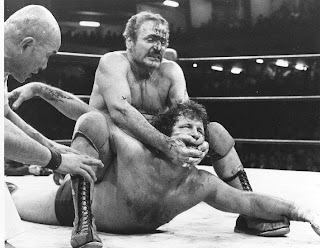 The year: I'm going to go with 1976. That's the best I can remember. The place: outside Cadillac, Michigan. My brother and I sit glued to the black and white TV, one of three channels. That's right, young'uns. Three channels is ALL we had: the local ABC, CBS, and NBC affiliates. FOX wasn't even a sparkle in an executive's eye back then. My brother and I, we're glued to our favorite weekend entertainment (after the dearly-missed less PC cartoons): Big Time Wrestling.

Big Time Wrestling was a staple not only in the Detroit wrestling scene, but the national one as well. Anyone who was anyone back then came through the Detroit territory, and this is before Vince McMahon turned his little corner of the wrestling territory into the juggernaut it is today. Dick the Bruiser, Abdullah the Butcher, Andre the Giant...they all passed through the Detroit area.

And they all, in their own way, met up with The Sheik.

The Sheik - or Ed Farhat - ran the territory for decades, their heyday coming in the 70's with a wide-ranging TV deal and regular stars that captured the hearts and imaginations of impressionable youth such as my brother and I. The Sheik was a madman who slinked into the ring, often prayed on his sacred rug to the chagrin of his opponent, the proceeded to maul, bite, and carve up his hapless opponent with a sharp foreign object before clamping him in the dreaded Camel Clutch, his signature submission hold (as seen above as he applies it to Terry Funk). 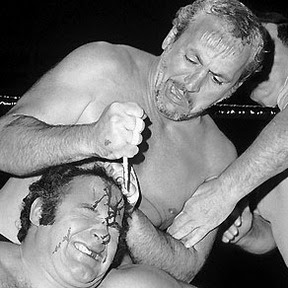 My brother and I were scared out of our wits by this guy. He made ugly faces as he jabbed whatever object he could into the face of his foe. He fish-hooked the guy's mouth. He stuck his fingers in his eye. Our hearts beat wildly with equal parts fear and awe. We'd go into a frustrated frenzy at his actions...how could he get away with it? Fortunately, there was a hero: Bobo Brazil. Bobo was one of the pioneers of diversity in the business, a black man wildly cheered by predominately white audiences. Bobo, the commentators always reminded us, was the only person who could scare off The Sheik. Sure enough, the roar of the studio crowd prefaced an eleventh-hour rescue by Bobo Brazil, who would almost get his hands on The Sheik. Arrgh! So frustrating! Again, the villain gets away. But matches were signed: Bobo would face The Sheik at the legendary Cobo Arena in Detroit, and there would finally be a reckoning. My brother could only imagine, as we lived nearly five hours north in Cadillac, Michigan.

Flash forward to January, 2003. I was still fresh to my new position as wrestling commentator in independent wrestling and was attending my broadcast colleague and dear friend Jim Hall's debut show for his Marquee Wrestling. At the after-party, I received the sad news: Ed Farhat, the fearsome Sheik, had passed away at the age of 76. There was silence followed by hushed tributes from the wrestlers and staff who had either known him personally or, like me, had been affected by the man's work in our younger lives. 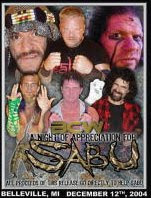 In something of a "come around full circle" thing, we flash forward once again, this time to December of 2004. Jim and I were asked to be commentators for a benefit show for Sabu - The Sheik's nephew - organized jointly by Scott D'Amore's Border City Wrestling out of Windsor, Ontario, and BCW's Detroit affiliate Prime Time Wrestling. Now the young kid who sat in front of his old TV, mesmerized and completely afraid of The Sheik in the mid-70's, was a small part of a show that paid tribute and respect to not only Sabu, but The Sheik. This was in Detroit. This was the heart of Sheik country, and a real heart of professional wrestling as history. Getting to say his name as a lasting part of DVD commentary cemented my own personal "horror" history with The Sheik.

Through my travels in that time, I met other connections to The Sheik, such as his son, Ed Farhat Jr., who runs the direct descendant of Big Time Wrestling, the All-World Wrestling League (AWWL). I also met a man I'm still proud to consider a friend, Mark Boone, a longtime musician, current wrestling manager, and lifelong Detroit wrestling historian. If there is anything to be known about wrestling in Detroit, he's the go-to guy. He even contributed to the soundtrack of the film about The Sheik, I Like To Hurt People. There's never a doubt in his voice when he says that The Sheik was the "Daddy of what became known as 'hardcore wrestling.'" The following pictures were taken by Mark himself during the 70's, at the same Cobo Arena that my brother and I longed to go to, and are only a drop in the bucket of his personal collection: 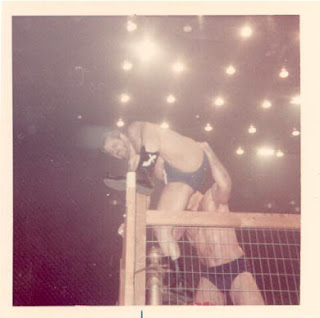 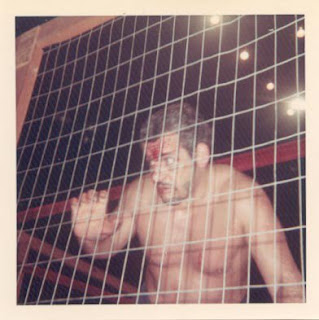 The Sheik was the monster under my bed. His was the name my brother and I evoked to scare each other. Back in a time when I was too scared to watch anything close to horror, a bloodthirsty, foreign-object-wielding, biting, scratching madman was enough monster for both of us.

And we wouldn't have it any other way.

(Like scary wrestlers? Then check out this post by my friend B-Sol of The Vault of Horror - trust me, this man also knows his wrestling. After you check out that post, check out more of his posts - you won't be sorry.)
Posted by Dod at 10:01 PM

Email ThisBlogThis!Share to TwitterShare to FacebookShare to Pinterest
Labels: growing up, roots of personal horror, the sheik, wrestling