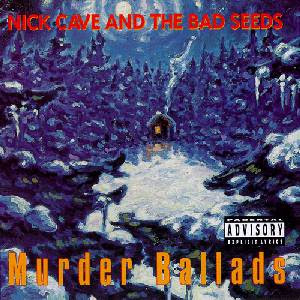 When I'm flying up above the zombie hordes, I like a little music to keep me from going insane. Well, more insane than I already am. I'm pretty easy when it comes to music. I stand firmly in the rock genre, but I can handle anything from electronica to ambient to classic country to mambo. If it sounds good to me, it's good to me.

One of my favorite CD's in my collection might actually fall in the genre of horror. Let's see: killer kids, jealous lover killers, hitchhiker killers, guns, knives, rocks...all on one CD. All on Nick Cave and The Bad Seeds' amazing 1996 release, Murder Ballads. Murder ballads are story-songs about crimes of passion, but Cave and his crew expand past passion and dive right into madness as well.

"Song of Joy" kicks off the festivities with a song about a wandering man who finds himself at the door of a stranger, looking for a place to sleep. The man relates his tragic, horrifying story, one about his sullen wife and children whom he loved dearly. One night, he returns home to find them horribly murdered with the words "HIS RED RIGHT HAND" scrawled in blood on the wall. To me, there's something about this dude that's not registering right. Are you beckoning me in? I don't know...I leave it to your interpretation.

"Stagger Lee" is actually an old legend made into different versions of blues songs, about the murder of William "Billy" Lyons by Stagger Lee Shelton (read more about it here). Cave spares no description; this is not a song you play for your grandma. Massive profanity and wanton violence are set against the minimal music that suggests quite strongly what Stagger will do in certain...ahem...situations.

"Henry Lee" is one of the most beautiful songs not only on this album, but in my opinion. Cave brings in P. J. Harvey to sing the female lead about a young man who tries to let his illicit lover down easy. She has other ideas and stabs him to death with a pen knife before throwing his body into a well. Never has bloody mayhem sounded so gorgeous. Lie there, lie there, little Henry Lee/'Til the flesh drops from your bones/For the girl that you have in that merry green land/Can wait forever for you to come home. Brrr...shivers.

"Lovely Creature" describes what might best be a ghost story. A man travels with a beautiful woman, who accompanies him through the night. By the time the man makes it home, she's gone, but he's sure she still out there somewhere, or as Cave puts it: Somewhere she lies, this lovely creature/Beneath the slow drifting sands/With her hair full of ribbons/And green gloves on her hands.

"Where The Wild Roses Grow" is another beautiful song featuring the ethereal voice of Kylie Minogue. Yes, Kylie Minogue. I'm totally serious. One would think she didn't fit here, but she is perfect in the role of Eliza Day, the object of affection of Cave's character. Remember how in the film "Frankenstein," the Monster developed that child-like logic of "beautiful things belong in the water"? Yeah, something like that happens here, but it ain't child-like: And I kissed her goodbye/Said all beauty must die/And lent down and planted a rose between her teeth. This comes after Eliza Day makes this observation: On the third day he took me to the river/He showed me the roses and we kissed/And the last thing I heard was a muttered word/As he knelt above me with a rock in his fist. Yeah, not really the ideal date, you know.

"The Curse of Millhaven" is a cheeky little story-song told from the point of view of Loretta (but she prefers Lottie), a strong-willed girl who lives in the town of Millhaven, where chaos is throwing the little place into a tizzy. Murders, disappearances, vandalism...someone's causing the good people of Millhaven to panic. Lottie doesn't seem to mind much about it all...probably because she's the one behind it all. It's a darkly humorous peek into the insanity of a 15-year-old girl.

"The Kindness Of Strangers" features the poor young girl Mary Bellows. All she wants is to travel to the ocean, and she accepts a ride from a man named Richard Slade. They stop at a hotel, and she lays down her boundaries right away. She tells Slade she's a "good girl" and that she can't possibly "permit him in." He "tips his hat" and goes to his room, but the situation is left sadly open when this happens: She sat on her bed and thought of home/With the sea breeze whistling all alone/O poor Mary Bellows/In hope and loneliness she crossed the floor/And undid the latch on the front door/O poor Mary Bellows/They found her the next day cuffed to the bed/A rag in her mouth and a bullet in her head/O poor Mary Bellows. Damn.

"Crow Jane" is about a legendary woman who lives near a town called New Haven and whose mind crawls and squirms with violence and vengeance. She gets a hold of several guns and as the song progresses, the population of New Haven drops from 48 to 28. People, do not piss off that nasty woman who lives alone down by the river.

"O'Malley's Bar" clocks in at just over 14 minutes and is a true story-song in all its gory, blood-soaked glory. It's a true descent into madness as a man - the main character telling the story - walks into O'Malley's Bar, which is full of familiar townsfolk just enjoying a beer. The man calmly begins shooting everyone he can, describing it in full detail. He relays what he sees, how he feels. He imagines himself as some kind of Angel of Death, that he has an absolute divine right to murder innocent people. It's unflinching.

"Death Is Not The End" is the lone "bright" spot in the entire CD. After the extreme mayhem of the last song, this cover of a Bob Dylan song basically tells the listener not to worry, not to fret, and that truly, "death is not the end." It features everyone on the CD, including Shane MacGowan of The Pogues, singing a verse, much like the end of a somber play. At this point, you want to throw flowers, but might be too depressed to do so.

I absolutely love this entire offering. Yeah, it's violent and it's depressing and it's unabashedly brutal. But they're stories. They're murder ballads, and they aren't meant to be about unicorns and jellybeans. It's not everyone's cup of tea - I have some friends that may pass out during "Song Of Joy" - but it's well-crafted, scary music.

It's a slasher film for your ears.

Until next time from the skies, keep rocking.
Posted by Dod at 5:18 PM