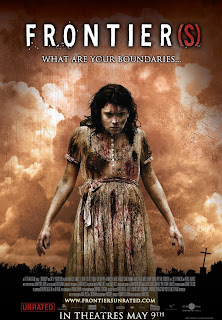 Remember in my review of Ils, I spoke of fear? It had crossed my mind that there would be a certain segment of the viewing population - not a large one, really - that would puff up their chests and proclaim that they would "kick ass" if placed in a situation that the protagonists of that movie faced. Everyone knows or has met someone like that. The hero of their own mind, they've probably only ever seen fear in movies or news reports from the comfort of their own home.

I'm digressing a bit, but please bear with me. What I'm getting at is that I consider fear to be a "primal" emotion. There are certain emotions hardwired into us from the dawn of time: fear, desire, pleasure, anger, and a few more. How do we often express these emotions? By eloquently stating a monologue? No, it's usually through the most primal of expressions: yelling, screaming, panting, laughing, grunting. Sounds, not words.

I wanted to bring up the "primal" angle because the movie I just experienced, Frontière(s) (aka Frontier(s)), brought up the primal elements in nearly every part of the film. The film, which definitely falls under the horror subgenre "French extreme," is from 2007, and is written and directed by Xavier Gens. It stars a very fine cast headed by Karina Testa as Yasmine or Yaz. Hm, I'm seeing a trend here: strong female leads in the three French extreme films I've viewed, both in acting and in the characterization. This is a good trend, as the actresses I've seen warrant worldwide attention for their skills and a strong female lead is always welcome.

Let's dive into the recap: right away, we're introduced to a France that is falling apart. An extreme right-wing government has been voted in and protests are plunging the streets of Paris into chaos. Fresh off a robbery, we meet two groups of young folks trying to escape. Yasmine helps her brother, Sami, to a safehouse to nurse his worsening bullet wounds. Tom, Farid, and Alex are the others, and they're the ones with the money and the police tail. Eventually, they all meet up, but Sami's in bad shape. Yaz wants to get him to a hospital, but the others think he may rat on them. Tom and Farid take a separate car into the country on their way out of France, and to wait for the others. Yaz and Alex, whose baby she's pregnant with although they have broken up, take Sami to the hospital. There, Sami dies, and Yaz and Alex barely escape the police who show up there. In this opening sequence, we're privy to the personalities of our wild bunch. Yaz is emotional but headstrong. Alex is a hothead, but his toughness is a facade for regret. Tom is a douche, and Farid is quiet and almost innocent.

Speaking of the douche and the innocent, they stumble upon a very, very rural motel to rest up for the night and wait for the others. Tom's digging it because the two women they meet there, Gilberte and Klaudia, are more than receptive to his douchey pick-up lines. A fearsome specimen, Goetz, shows up to encourage the love motel shenanigans. Goetz, by the way, is played by Samuel Le Bihan, who played Grégorie de Fronsac in one of my absolute favorite movies, Les pacte des loups (Brotherhood of the Wolf). To say these were two different roles is an understatement. 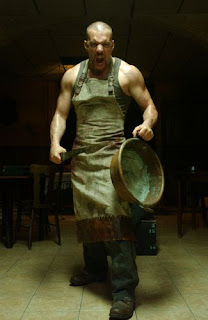 Angry butchers: a horror staple.
Everything seems great for Tom and maybe Farid. Tom's loving the wanton sex the women offer, while Farid is less than enthused, claiming he has a "girlfriend." The motel even offers a home-cooked meal of...uh...something or another fried up in pork fat. As a bonus, "Mom" sits nearby to have her meal spoonfed, even if some of it pops out of her throat tube. When Farid refuses to eat the pork fat because of his religion - he's Muslim - the family seems not just offended, but angry.

While Tom and Farid discuss what just happened, a new guy bursts onto the scene, this time brother Karl. He's pissed that Tom insulted the women and threatens the guys, who fight back. They don't get far before Tom is floored by a blunt object to the face and back, and Farid is held at gunpoint by Karl. But, you gotta hand it to these guys, they do fight back in the face of fear. They don't "kick ass," but they do take the opportunity when it arises. Stabbing Karl with scissors, Farid snags Tom and they escape. For a while anyway. Goetz, in pursuit, runs them off the road and down a mineshaft before leaving them for dead.

The pair is still alive, though, and cut into the nearby mine for what I thought was such an intense part, I could barely take it. See, one of my greatest fears is dying alone in a tight tunnel, stuck and unable to move in either direction. Just add water, and my fear intensifies. Would I kick the tunnel's ass? Probably not. Farid panics and actually grows a pair (something Tom told him to do earlier in the movie) while Tom weeps for his mother, which I though was a nice, sad touch. Tom does make it through the tunnel, where he meets the rotund Hans, who brains him and drags him out. Farid scrambles back the way he came, where he must face some weird scraping, scuttling noises. Poor Farid, though. He makes through so much before getting trapped in a steam room-type gimmick and is basically melted to death by Hans. He was a tough little bastard, though.

Alex and Yaz show up at the motel, but are given the runaround. Their friends, they're told, are at the nearby hostel (uh-oh, that word is never good in a horror movie). Alex and Yaz arrive and meet doll-like, hunched Eva. While Alex heads for the bathroom, which is across the courtyard of the old mine facility, Yaz meets "Father," a former Nazi who settled in the French countryside. I mean, you know something is off when Yaz scans the dining room and sees old pictures of Nazi banners and a Nazi officer (presumably Von Geisler, the Father). Alex hears sounds and explores the facility, where he finds Tom, who is by Jove still alive. He's been meathooked upside down and implores Alex to run. Alex, realizing the gravity of their situation, rushes in to get Alex, but the two are subdued by the Von Geisler family. Seems the old man in his infinite, hateful, and deranged mind, wants to recreate a master race and despite her "impurity," wants Yaz to be the brood mare for his son Karl. 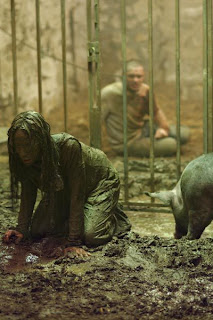 Alex and Yaz are chained up in the hog pen, but Alex manages to free Yaz by straining enough on the rusty chain. Yaz digs and digs in the hog poop and dirt to create enough room to crawl under the iron gate, but pauses to admit to she still loves the father of her child. As much of a bravado-spouting tough guy Alex acted like in the beginning, he really was a caring, decent guy under it all. Yaz runs and runs, until she meets a guy driving along the country road. Yay, she's rescued!

Yaz is returned to the compound, where she's put right back in the pen with Alex. While she was gone, Von Geisler severed Alex's Achilles tendons so he wouldn't escape. Von Geisler wants Yaz readied to be betrothed, and kills Alex in cold blood. When Yaz awakens, she's in Eva's room. Eva befriends her and, while she cuts her hair (in a scene very reminiscent of Martyrs - removal of the hair to demoralize - like Samson lost his strength when his hair was cut), tells her tragic tale. She's not related to the other nutjobs and after having been kidnapped, has been a similar brood mare to Hans. Their children are not "perfect," so they are the ones scratching around in the mine. 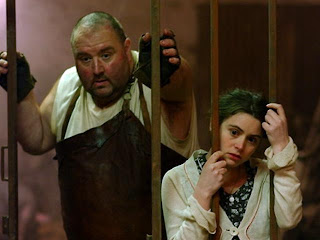 At the "wedding dinner," Von Geisler places Karl in charge of the family and proclaims he and Yaz "married." Here, the tension between family members is palpable. Goetz thinks he should be in charge, and Von Geisler makes it known he is only proud of Karl. Yaz is in a hopeless situation, but the look on her face as she remains defiant is encouraging. She hasn't given up yet. Quicker than The Flash, Yaz holds Von Geisler at knifepoint and demands to leave. The family starts to fall apart pretty quickly. Von Geisler wants all guns down, but Hans wants to prove himself and says he will kill both to stop Yaz. He makes good on his word, firing, but only killing his father. Karl fatally shoots Hans as Yaz makes her escape.

Into the mine Yaz goes, first dealing with Goetz in a particularly nasty manner. You see the implement of his demise right there, and you know it's going to be used. It's a little like Chekov's Gun in theater: you introduce something like that, you best use it before the play's over. Karl traps her in an elevator and it all seems lost. But you can't help but notice what happens when Karl says "au revoir." I actually shouted out "ha!" when it happened. Karl won't be getting up from that head wound. 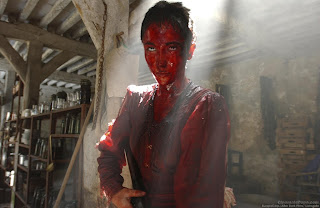 Now this is someone ready to kick some ass.
Eva tries to help Yaz escape, but the last two Von Geislers, Gilberte and Klaudia show up like a couple of Tarentino femme fatales, firing a hail of bullets at Yaz, who is also armed. Yaz fires on a gas tank and boom goes the...uh, gas tank. No dynamite, but just as effective. In a final battle with Gilberte, Yaz reverts to true primal brutality and uses her teeth as a final, desperate way to win the fight. And as she finally gets away into the waiting arms of the police, she breaks down in a series of cries and screams.

Primal. The yelling and the screaming. Yaz barely speaks during the last half of the movie. She's crying and screaming, whether in fear or rage, or both. Primal elements cover her in the film in dirt and blood. Besides the earthen dirt, she's nearly consumed by fire and is cleansed by rain - more primal elements. The tunnels of the mine: forcing a primal fear in not only the characters, but the viewers. Fear of the dark, of strangers, cramped places, the unknown. The lust that lures Tom and Farid deeper into the trap: primal. The desire for money that fuels the gang to commit robbery in the first place. The rage of Yaz as she finally snaps. It's all there.

Now, I could just be reading what I want into it, and it may just be a really intense, bloody French torture movie. That said, I enjoyed it as a direct line into our primitive selves. We can always speculate what we would do in these extreme, fearful situations. Some of us, like Yaz, could bring ourselves to kick ass. But who knows? Fear is primal, and it's the part of us we can't control.

Until next time, make sure your shelters are secure and I'll see you from the skies.
Posted by Dod at 4:37 PM