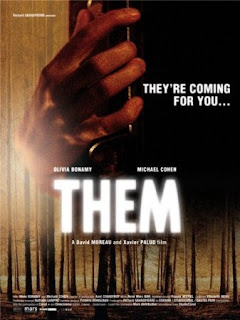 I'm not all zombies and ghosts. So, when I asked Andre Dumas, author of the fantastic horror blog The Horror Digest (see, another shout-out!), to recommend to me some French horror films when I wanted to watch something a little different, she gave me the titles of four offerings. Martyrs was the first. The one I'm about to present was the second. Once again, I was not steered wrong.

A little symbolic segue: back when I lived in Michigan, there was a nearby town called Suttons Bay. In that little hamlet was a restaurant called Boone's Prime Time Pub, and in that restaurant were the absolute best hamburgers known to man. You know when you have the best burger known to man, and then eat burgers that are really good, you still compare them to the BBKTM? For me, Martyrs was that best burger, and Ils (referred to in here by its English name, Them) is that really great burger that gets compared to the original. Long segue, I know, but I'm hungry and burgers are always on my mind.

But, to compare it to Martyrs is really doing it an injustice. Them is an entirely different movie about an entirely different story. It's deftly directed by David Moreau and Xavier Palud, and stars two quite beautiful people in Olivia Bonamy and Michael Cohen. These two could easily be lead actors in Hollywood, and their acting chops more than hold up. Let's dive right in, shall we?

Ah, how idyllic.
As the movie opens, we are treated to a prologue wherein a mother and her teenage daughter argue about the daughter's attitude while driving at night in Romania. The mother swerves to avoid what she thought was a person, and they crash into a pole. They're fine, just shaken, but the minivan has seen better days. When the mother gets out to try fixing the engine somehow, she vanishes from from behind the upraised hood. The daughter, once annoyed by her mother but now worried and frightened, begins to hear sounds. There are whispers, taunting her. Mud collides with a window. The girl tries to phone the police, but is suddenly strangled from behind, although we can't make out who or what it is thanks to the rain.

The next day, we meet French teacher Clementine (Bonamy) as she leaves school for the day and drives home...right past the minivan from the prologue (being hauled off by the police...empty). She lives with her boyfriend Lucas (Cohen) in a really sweet old mansion on the Romanian countryside. Seriously, I wanted that house. It's a nice life: she teaches, and he's a writer. They even sort of have a dog, a stray that wanders by once in a while for food. All they need is a picket fence and they'd be set.

Yeah, not in this flick, babies.

That night, strange things happen. Awakened by her car stereo, Clementine, with Lucas, watches as someone blatantly steals her car. Then come the sounds. Footsteps. Doors opening and shutting. The TV goes on and off. The couple sees things. Flashlights. Fleeting figures. Someone is trying to break into the house, it seems, and they're being frustratingly ninja-like about it. It gets real when a door that Lucas just accidentally broke while swinging at nothing slams shut and puts a good chunk of glass in his leg. He makes it back to the locked bedroom and a waiting, frantic Clementine. All the while, he's glancing back at...what? We, the audience, don't see a thing. But something is there. 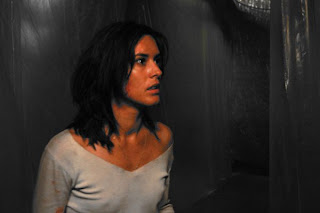 Attics are just no good.
Clem and Lucas manage to escape from the bedroom, but only make it to one of the bathrooms (I say "one of" because this house is enormous). From there, Clem figures she can climb into the attic and find a way out. Yeah...um, hey, fellow horror fans, show of hands: do we know how trips to the attic work out in horror movies? That's right. Clem is not alone. Now we're seeing figures. Those feet stalking Clem belong to someone, but who? One of the attackers (we damn well know there are more than one) grabs Clem, but she fights back, causing the person to fall presumably to his or her death. The others, at least three or four of them, don't take kindly to that and step up their pursuit of the couple. They escape into the woods, chased by whooping, strange-noise-making...what? People? Something supernatural? Reaching a fence, Lucas is too injured to go over, so he sends Clem for help. Like the attic, "sending for help" never turns out well for any horror protagonist. Clem is captured and hauled off, but Lucas isn't far behind.

I'll keep it spoiler-free, but from here, we find out more about the attackers. Who they are, or rather what kind of people they are. They aren't who you might think. And even if you guessed semi-right, you're probably still a bit off. That final scene, so innocent and quiet, will still give you the loudest chills because the realization will set in. Even as you read the text which wraps up the story, you'll wonder just why it happened. 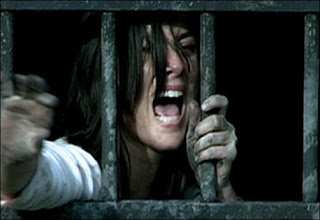 A very frantic Clementine...
Some of you will find yourself speculating, "well, I would've kicked some ass." Have you ever felt fear? I mean, real fear? How did you react? Did you puff up your chest, attach a chainsaw to your hand, and quip "Groovy"? Or did you feel nauseous, want to run, want to get away now? Fear does strange things to people. A lucky few can rise up and overcome it, maybe really turn the tables on physical attackers. Most of us will be looking for the nearest escape route, our breath terrifyingly short, the blood drumming in our ears. We'll forget the toughness. We'll just know we have to survive.

This is the second French horror movie in a row that, to me, had outstanding directing and acting going hand-in-hand. It also employed the minimalist approach: few settings, two main actors, and a tension-driven plot. There was relatively little blood in it, so gore fans might be disappointed, but come on...the tension was so solid. We see very little of the antagonists right up until the very last part of the movie, yet we absolutely know they're trouble.

Oh, and the sound. The sound was like another character in the movie. Seriously, when you watch Them, don't just turn out the lights, turn up the volume. Every little creak and step and shuffle is crisp and clean, and that's not even the sudden scary noises. 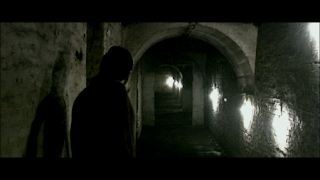 You know me and my love/fear of underground places.

You know, I still pine for those burgers at Boone's Prime Time Pub (they'll even mix in chopped jalapeños for you), but there have been other burgers almost as delicious that I would recommend to anyone. This burgermovie comes highly recommended from me now. It's quick (74 minutes) and it's tense, topped off with just being well-made.

OK, still hungry. Until next time, lock your doors.
Posted by Dod at 5:56 PM