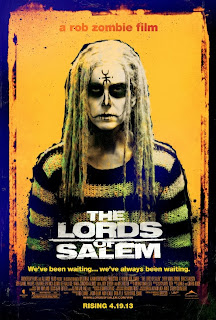 Somewhere in him, Rob Zombie has the most amazing horror film.  He's got a singular vision, a unique eye for detail, and a deep knowledge of all genres of horror.  I'm not saying his present movies are bad.  For me, they're "almost there."  He's got the perfect horror movie waiting in the wings, and he's almost there.

Written and directed by Zombie, The Lords of Salem edges ever so closer to being the definitive Rob Zombie film.  It has that grindhouse look, with a 70s-style title card and aesthetic, even though it's set in modern times.  With his versions of the Halloween movies, he still had to conform to a certain mold.  But with The Lords of Salem, we see him going back to his "I'll do it my way, thanks" style.  While Lords didn't totally grab me, there is a certain flair to it that intrigues me.  It's that closer step to that defining movie. 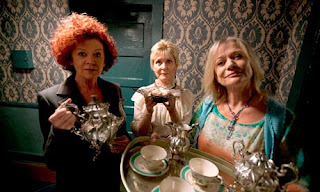 The plot is straight out of 70s witch exploitation movies, and that's not really a bad thing.  Sherri Moon Zombie plays Heidi, a successful Salem, Massachusetts, nighttime DJ along with her co-stars Whitey (Jeff Daniel Phillips) and Herman (Ken Foree).  One night, she receives a mysterious album from a group called The Lords.  Upon playing the record, the strange, archaic music causes her to feel strange and have weird visions of witches.  She gets to know a researcher, Francis Mattias (Bruce Davison), who investigates the record and The Lords, and finds some horrifying connections.  Meanwhile, Heidi's landlord (Judy Geeson) and her two overly-nice friends (Dee Wallace and Rocky Horror Picture Show's Patricia Quinn) take a strong interest in Heidi and her role in the increasing weirdness surrounding The Lords' upcoming concert in Salem.  Heidi's hallucinations increase as she fights the terrible implications they offer and her own personal demons, as she is a former drug abuser. 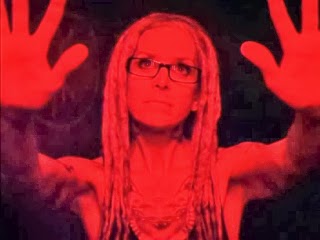 The visual aesthetic is what struck me the most.  There is a rich palette of colors in certain scenes, especially the dream sequences.  Everyday life looks like...every day life.  But, yeah, those dream sequences.  I saw it written somewhere else that Zombie had channeled Ken Russell in this film, and I'd say that's pretty accurate.  Russell always had the most oddball, foreboding, and twisted hallucinogenic sequences in film, and you see it echoed in the work of David Lynch and Lars von Trier.  Zombie goes for it here as well, and for the most part, it's not bad.  I didn't like the movie as much as I liked his insane House of 1000 Corpses or the twisted buddy-road sequel The Devil's Rejects, but I definitely didn't dislike it.  It fell somewhere in the middle for me, with the hints of something possibly greater waiting in the wings in future films.

Oh, yeah, lest I forget:  this movie features the creepiest Meg Foster performance in years, possibly her most intense role as the ancient head of an evil coven.  If you've seen They Live, you know who Meg Foster is.  Oh, yes, if you're a fan of hers, I think you'll enjoy her scene-stealing moments in this movie.

Until next time - which will be in a couple days, actually, as I have a great interview with two independent filmmakers coming up - here's the trailer: