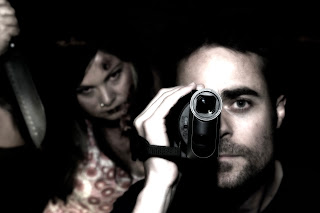 Hey, good people in all the zombie apocalypse shelters, I've a nice treat for you this time around.  You'll recall that recently, I reviewed an excellent found footage/point-of-view film called Skew.  I honestly enjoyed its mind-bending premise and intense atmosphere - as well as its gut-punching ending - and was thrilled when I got in touch with Sevé Schelenz, the writer and director of this fine entry into an often-crowded subgenre of horror.  He agreed to answer some questions about Skew, his influences, and where he's headed in the future.
So, ladies and gentlemen, allow me to introduce to you, my interview with Mr. Sevé Schelenz:
So, Sevé, what experiences inspired Skew?  What made you decide to go with the found footage sub-genre?
Sevé:  "I had been itching to do a feature film for some time as I spent the last while focusing on some independent television projects.  One of the biggest obstacles I faced was having enough money to make a film since all funds were coming out of my own pocket. I was also concerned with the film’s production value and if the audience would accept it.  I had seen my share of independent films that fell short because they attempted to make a Hollywood production without having the necessary budget.  Instead of falling into the same trap, I decided to turn this perceived limitation into an advantage.  Two days before an actual road trip with some friends, the idea of one of the characters filming the entire journey through a handheld camera struck me.  It had been five years since The Blair Witch Project had been made and I felt enough time had passed that stylistically another film in this same vein could be made.  Of course I didn’t want to copy what had already been done with The Blair Witch Project so I put my own spin on it.  I wrote the first draft within four days of my actual road trip, and a final script was completed in six months.  Without giving too much away about Skew, I think viewers will be surprised to find out that it is not actually a “found footage” film at all.  There was never any intention to have tapes found by some sort of authority and edited together for the world to see as a pseudo documentary.  Actually, Skew is a narrative film that just so happens to be filmed from the point of view of a video camera owned by one of the characters.  Of course it gets even deeper than that, but I will quit while I’m ahead so as not to spoil anything for the audience." 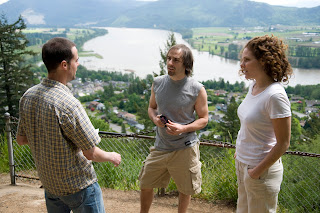 How did you get into filmmaking?  Are there any directors or writers who directly inspire you, or have inspired you on your path?
Sevé:   "I began making short comedy films in my high school years.  I used to bug my family and friends to be in them all the time.  I had a camera strapped to my hand virtually at all times.  In my last year of high school I remember avoiding my guidance counselor, as he wanted to sit down and discuss my future plans for university.  It wasn’t until he told me that film school was an option that I actually took the time to look into it.  I assembled a portfolio of finished films and sent them off to each respective university along with my application and other prerequisites.  After graduating from the film program at York University in Toronto, Canada, I moved to the West Coast and found employment in the post-production field.  While working I continued to write, direct and produce various independent projects in the television medium on the side.  After a while, the filmmaker side of me started calling and I moved away from these independent television projects and focused on making features.  After working on a few film concepts and writing a comedy feature, I jumped headfirst into developing Skew and the rest is history.  In terms of film directors, there have definitely been a few who have inspired me.  Spielberg, Cameron, and Tarantino are at the forefront.  In terms of horror, I think Carpenter’s The Thing and Halloween have had a huge impact on the type of film I have made with Skew.  As a filmmaker, John Carpenter has shown that he really understands the source of what scares us and doesn’t let up on it."

I absolutely agree with that!  How were you able to draw such natural, seemingly unscripted performances from the actors?
Sevé:   "Finding the actors for Skew was quite the feat as we had to go the route of non-union for the film because not only did we want unknown actors in order to maintain a sense of realism for the film, but we couldn’t afford to pay the union’s rate.  We had many interesting characters show up for our open auditions.  I have to tell you that the majority of these people should not be acting at all.  It almost got to the point where I saw myself having to play one of the characters in the film.  Finally we were blessed with Amber Lewis who initially read for the role of L.T.  Once we discovered her range, we had her do a cold reading for Eva right then and there.  She was offered the role on the spot.  Next was Richard Olak who read for the role of Rich.  He nailed it on the first try and was instantly hired.  The last major character we needed was Simon.  The instant Robert Scattergood began screaming his lines in terror, we were sold.  The key to getting these realistic performances from my actors – beyond the fact that they were very talented and professional to work with – was in the rehearsals.  We spent a large amount of time in pre-production going over the script to ensure the actors not only understood how to deliver their lines, but why they were being delivered in such a way.  We did not deviate from the script at all.  There are very few unscripted lines in Skew and once you see the film you will understand why.  Skew is as much a suspense thriller as it is a psychological horror and there are many pieces to the puzzle that were planted at very specific moments throughout the film. It was very important that the dialogue and action stayed true to this." 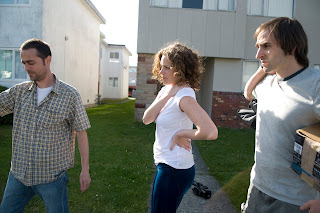 They really nailed it!  How important is it to add a psychological aspect to supernatural horror...well, any horror, really?
Sevé:   "Skew is the first feature I have written, directed, produced, edited and even partially filmed.  When I originally wrote my screenplay, The Blair Witch Project was definitely a catalyst for it.  One of the main devices used in The Blair Witch Project is anticipation.  I remember seeing this movie on opening night and feeling completely restless and apprehensive the whole time.  For me, a good horror film blends this feeling of nervousness with the unexpected jump-out-of-your-seat scares. You combine this with a good script with at least one brain-teasing, unforeseen twist and I’m hooked. When I see a horror film I want to be forced to think a little.  It doesn’t have to be overly complicated, but don’t dumb it down for the audience. I completely lose interest in your typical “paint by the numbers” horror.  The psychological aspect to horror naturally lends itself to anticipation."

Are there any other genres you'd like to tackle?
Sevé:  "In film school one of my screenwriting teachers preached the idea of picking one genre and sticking with it.  She believed in order to work in the industry you had to perfect one genre in to make money.  I disagree with this as I have plenty of ideas that span a wide range of genres.  I think it’s definitely important to not only master the basics of screenplay writing, but to do your research within the genre you undertake. For Skew, I watched Blair Witch roughly six times and focused on different aspects of the movie during each viewing. As previously mentioned, comedy had been my filmmaking forte in the past so I definitely see myself coming back to it in the future.  Yet, as of late, I have been working on a number of different genre pieces including a suspense thriller, another horror, and even a children’s film.  Did I mention the musical?  Just kidding." 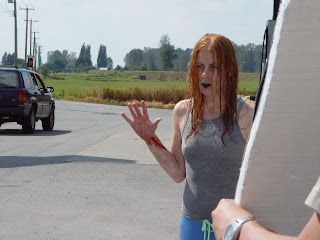 What are your future plans?  Any projects we can look forward to?
Sevé:   "Right now I am working on another horror feature with a writing partner.  We are fairly close to locking it and will begin our funding drive and pre-production soon.  I hope to go into production on this in early 2013.  I decided it was time to move away from the P.O.V. style and go with something a little more traditional.  There’s not much else I can say about the project except that it involves a lot of blood, boobs and black ooze.  As for the immediate future, I’ve been invited to judge the features at A Night Of Horror International Film Festival in Sydney, Australia, which I’m very excited about. Skew had its world premiere at this festival last year and won the Independent Spirit Award.  So I’ll be heading to Australia in March to hopefully see some great independent horror films.  In terms of Skew, we are coming to the end of our festival run—although we were just recently accepted into the StarLite Film Festival in Florida—and that puts our festival selection total up to forty-one.  We’ve also won seven awards including best feature, best actress and best director.  In addition to that we’re now available for streaming on Netflix in the U.S., DVD in Germany, and our most recent sale to Horror Channel in the U.K.  All in all, Skew has really had a great run and I look forward to our future release on DVD in North America."

Sevé, a huge thank you for answering my questions!

Sevé: "Thanks so much for taking the time to chat and help promote Skew.  I really do hope your readers have a chance to check it out at some point soon.  If they want more information they can check out our IMDb page at: http://www.imdb.com/title/tt1808477/, our YouTube link at http://www.youtube.com/watch?v=IjwBwuKD8mI, or Rotten Tomatoes at http://www.rottentomatoes.com/m/skew_2011/ to see what all the buzz is about.  I also encourage your readers to drop me a line through one of these sites if they have any questions about the film.  Thanks for supporting independent filmmaking, Dod.  Keep hacking and slashing away at those reviews!" 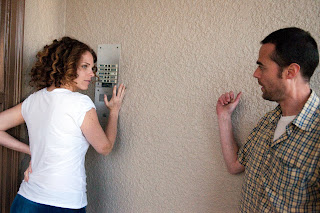 Again, huge thanks to Sevé Schelenz for graciously and patiently answering all my questions!  Be sure to check out Skew on Netflix Instant.  Also, keep an eye out for Sevé and the great cast of this film. They're goin' places, I tell you!
And until next time, dear readers, always make sure you know exactly where your camcorder comes from...

Email ThisBlogThis!Share to TwitterShare to FacebookShare to Pinterest
Labels: behind the scenes, independent film, interview