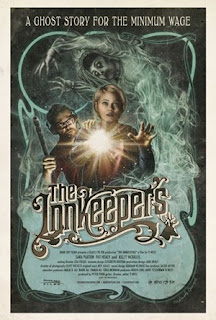 Ti West has a bright future in filmmaking.

That needs to be said right off the bat.  The writer/director of The House of the Devil (which bears a second look from me) set out to make an homage/update to the classic haunted house story and - despite a near-miss of an ending (which I won't spoil here) - created a beautifully tense and suspenseful film with The Innkeepers.  West has an uncanny talent for setting up scenes and building tension, as well as drawing performances from the actors that fit the style of the film perfectly.  He's building on such a high platform that as his films get better and better, we're going to see more rich visual storytelling as the years and films go by. 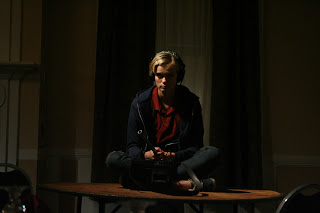 The Innkeepers is mostly a two-character film, with Pat Healy starring as the snarky Luke and Sara Paxton as the enthusiastic, cute-as-a-button and asthmatic Claire.  Luke and Claire are the only staff on duty at the Yankee Pedlar Inn, a quaint little hotel that is on the verge of closing up shop.  Luke started a ghost hunting website and enlists Claire to help gather evidence.  Claire is gung-ho about finding out more regarding the local legend of a woman who hung herself after being stood up at the altar.  While the two take shifts, we focus mostly on Claire as she investigates strange noises and spooky hallways, rooms, and garages.

The inn is short on guests, but not short on creepiness.  There's a troubled woman and her young son (Alison Bartlett and Jake Schlueter), staying there as leverage in an argument with her husband.  There's also a famous actress turned psychic, Leanne (Kelly McGillis), who seems to know more than she's willing to let on.  A strange, sad older man (George Riddle) who insists on staying in the hotel room where he spent his honeymoon.  As the night wears on, Claire forms a bit of a bond with Leanne, whose steady drinking gives cause for skepticism from Claire, despite her fan-girl-ishness.  The woman and her son storm out after what they believe is shoddy treatment by the staff (causing some good lines from Luke), but Leanne stays.  After a big scare, Luke confesses his feelings for Claire in a roundabout way.  Yet after another big scare, he runs off, saying that his encounters with the local ghost were fabricated and the real terror he feels after exploring the basement is too much for him. 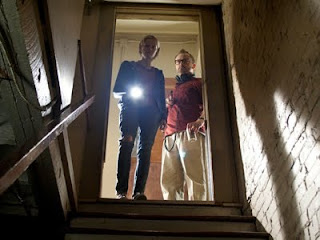 Leanne warns Claire that something horrible will happen to her if she doesn't leave.  Claire decides to evacuate the inn, and discovers the old man dead in a bloody bathtub, a victim of suicide.  Luke returns and tries to tell Claire something, but she's panicked and wants him to help her get out.  When she heads to the basement, thinking Leanne has somehow ended up there, the movie hurtles towards its sad and strange conclusion.

The only issue, if I can call it that, that I had with the movie was its ending.  It wasn't quite there for me.  I tried thinking about it from outside the box, but still couldn't get a strong feeling for it.  Endings are hard, I know that.  But when you consider the rest of the film is so solid and so incredibly well-filmed, it's really a small nitpick overall.  As I mentioned, the tension is palpable.  You really are along for the ride as Claire explores the hotel and encounters both real and red herring scares.  The acting from Paxton and Healy was simply fantastic.  They have obvious chemistry and were just so natural.  They seemed like real people having a really crazy night at an allegedly haunted inn.  The dialogue was natural, never forced.  The scares were beautifully done, subtle yet never weak.

Ti West really has the potential to become one of this generation's greatest horror filmmakers.  He understands tension and character, and modern - and mainstream - horror needs more of that to effectively balance out the slick shocks and occasional gore.  I expect his next film will be even better.

*  Any time the audio equipment was used.  Excellent use of sound.

*  The banter between Luke and Claire.

*  The ghost at the top of the stairs, then in the basement.  Subtle but oh, so creepy.

*  Luke and Claire trying to contact the ghost in the basement.  Ratchet that tension up to ten!

And now, as a small bonus, here are some pictures of the actual Yankee Pedlar Inn I took on a recent road trip up to Torrington, Connecticut. 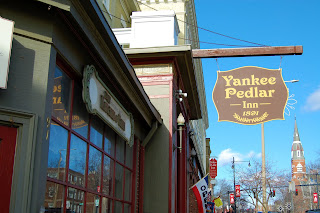 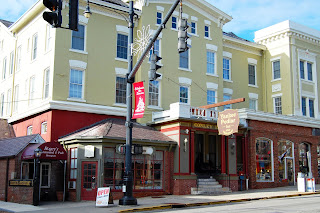 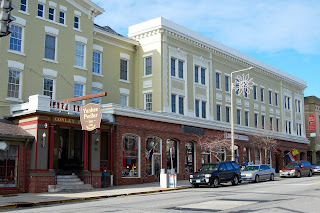 Until next time, dear readers, enjoy the trailer: