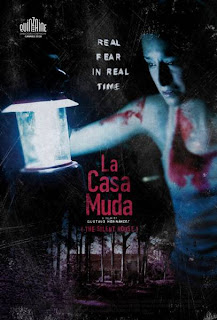 From the moment La Casa Muda (a.k.a. The Silent House) begins, the camera eye never blinks.  That was the drawing point in the advertising for the Uruguayan suspense offering:  for 79 minutes, there is one long, continuous take.  The real draw is the tension it creates and ultimately the part it plays in the actual story, a minimalist take on madness, fear, and possibly ghosts...with a twist...all based on a true story that occurred in the 1940's.
Laura (Florencia Colucci) and her father, Wilson (Gustavo Alonso), arrive at a rustic, out-of-the-way cottage owned by family friend Nestor (Abel Tripaldi) with the intention of getting it cleaned up to sell.  Nestor gets them set up, warning them not to go upstairs due to the precarious nature of the stairs.  He leaves them to turn in early as dusk sets in. It isn't long before Laura hears noises upstairs and begs her father to check them out.  There are sounds of a struggle, and Laura is frozen in fear before she carefully explores the old house. Her father returns, bound and bloodied, and Laura is sure there is someone else in the house, stalking and taunting her.  A little girl appears out of the corner of the camera eye several times, but something even more sinister seems to be closing in on Laura.  After a run-in with her mysterious antagonist, Laura runs outside to see the girl for the first time, but also meets a returning Nestor.  Nestor investigates the supposed noises and intrusion, disturbed that Laura went upstairs, but then disappears while he and Laura check out an upstairs room.  Laura loses her source of light and relies on an old Polaroid to take strobe flashes of the room to see where she is, ratcheting up the tension.  The little girl makes an appearance in one flash, as well as someone who appears to be Nestor advancing on Laura.  She escapes the room, and makes a strange discovery in another room:  hundreds of Polaroids showing Nestor, her father, and herself, as well as other young women.  Some seem innocent enough, but others...something a bit...off about them. 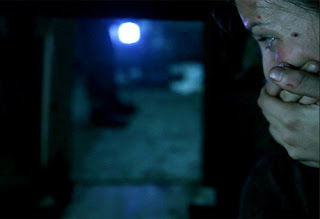 Laura finds Nestor bound and bloodied soon after, and from here, the movie takes an interesting sharp turn.  The dialogue changes tone, Laura's emotions change, and certain truths come to the forefront.  When it happens, and for the rest of the movie, it's no surprise that the viewer might be confused.  Hell, I was.  But things make sense the more you put the pieces together.  All the clues are there.  I won't give much away, but I can say the following:  what you see for the first 70 minutes or so is not really what you might think it is - it's not as cut and dried as one might believe.  Listen to what Laura says towards the end, pay special attention to the Polaroids during the credits, and wait for the mid-credits epilogue.  Put those clues together and you'll get exactly what happened.  Wow, a movie that makes you do some of the detective work?  Yes, please.
La Casa Muda is full of quiet tension, where every noise counts.  The camera never shies away from Laura, and in that, buries the mystery deeper and deeper.  By the end, you'll ask yourself, "but how can that be?" but if you look at the clues, you'll see.  The dialogue is sometimes so quiet, though, that you'll strain to hear it even though you'll have the benefit of subtitles.  It could be because I saw it on-demand, so it could be Xfinity's problem.  But the camera moves fluidly through the house with Laura, and I imagine a choreographed dance as the cameraman must know exactly where Laura is and is to be through the entire 79 minutes.  I don't imagine that would be very easy, and I wonder how many times they had to start from the beginning to get it just right.  I can just see them getting right to the end, and someone trips..."Aw, crap. OK, cut! From the top!"  That's scary in itself.
It was a good movie, with some fine acting by the few actors involved.  The shots were set up nicely, considering the difficulty of shooting one whole take.  And everyone knows I love the use of low ambient music to create deeper tension.  It's not a perfect movie, but it was well worth the price to pay for on-demand.
But now I don't want to renovate an old cottage.  Or own an old Polaroid.
Check the official trailer:
Posted by Dod at 2:37 PM

Email ThisBlogThis!Share to TwitterShare to FacebookShare to Pinterest
Labels: 2010, atmosphere, based on true story, minimal, old house, one take, uruguay