In The Mouth Of Madness (1994) Getting Lovecrafty 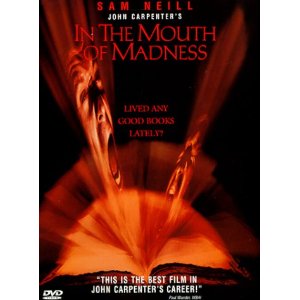 When John Carpenter wants to end the world, he does it in such interesting ways.

In The Thing, he hinted that a parasitic, all-consuming alien life form would spread to the rest of the world unless it was stopped at that lonely Antarctic outpost.  The son of the Anti-God would usher in its unholy father in Prince of Darkness unless several desperate people ended the threat in a run down old church.  However, with In The Mouth of Madness, it's reality itself under assault from the Old Ones made famous in the literary world by H. P. Lovecraft.  And what can one man played by Sam Neill do?

Lovecraft was known for penning tales of unseen horrors, monsters so vile and so primed to crack reality at its seams that to glimpse them would cause instant madness.  The whole Cthulhu mythos?  That was him.  Casting shadows over Innsmouth?  Lovecraft.  The fish people who worship the mad god Dagon?  Yep.  He even had a story called "At The Mountains Of Madness," so it's a pretty fair bet that In The Mouth of Madness is a tip of the cap to his writing genius.

But Lovecraft isn't the only prolific, talented writer showcased in the film.  There are several obvious nods to my own longtime favorite, Stephen King:  the northeast region, the small town, the name of the antagonist author (Sutter Cane = Stephen King).  In truth, the entire film is about fiction, about the written word and its power over reality.  Words guiding us to believe anything, then using that power to fuel...well, in this case, the return of the Old Ones.  And that's not a good thing, dear readers. 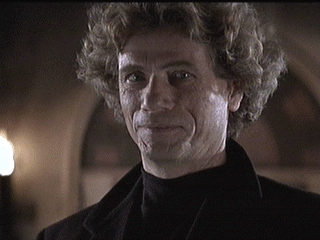 See, Sam Neill plays John Trent, insurance investigator extraordinaire. When we first meet him, he's a little on the...nutty side.  He's locked up in an asylum when he's visited by Dr. Wrenn (David Warner), who wants the lowdown on what brought him there.  So John tells him the whole, horrifying story...which begins when he's called in by a publisher (Charlton Heston) to find their missing cash cow, the eccentric mega-superstar writer, Sutter Cane (Jurgen Prochnow), who has a final, blockbuster novel to get into the stores. The name of the book? "In The Mouth of Madness."  After reading some of Cane's horrific novels, John has bad dreams, weird feelings, and a sudden revelation:  the covers of Cane's books can be manipulated into a map of New Hampshire, revealing the location of a fictional town called Hobb's End.  Accompanied by editor Linda Styles (Julie Carmen), John sets out to find Hobb's End.  After a very trippy...er...trip, he finds it.

Hobb's End is like a ghost town with some eerie little residents, like the strange old lady up at the hotel bearing the name of a real Lovecraft character (Pickman from "Pickman's Model").  Discovering a menacing-looking church on the outskirts of town, John and Linda investigate and find Sutter Cane, that's for sure.

From there, things get really freaky in the little hamlet of Hobb's End.  Linda goes after Cane, but she's helpless against the new, vast power that the Old Ones have granted the author.  Then it's down to John, and his role in what is essentially the end of all that is.  John slowly discovers the truth about Hobb's End, its residents, and Sutter Cane, and give the man credit, he stands up to it the best he can.  But despite his obvious strength, Cane is far, far too powerful.  John is meant to deliver the end of the world, typed just as Cane envisioned it, and there's nothing he can do.

The ending doesn't present any in-your-face world destruction scenes.  In that Carpenter never shows you out-and-out chaos, he's making it even more frightening.  John Trent may be the last sane person on Earth, and we're hanging on to that final unraveling thread with him.  We know something's going on in the world, but just like Lovecraft did in his stories, we don't see it.  The knowing is terrifying enough.

In The Mouth of Madness isn't linear in its storytelling.  Much of the story is a flashback controlled by John's memories.  But there's a bit of meta-storytelling going on here as well.  Sutter Cane goes on and on about controlling reality, and he may be controlling what we see in the movie as well.  During a fun little scene on a bus late in the movie, he proclaims that he "is God now" and asks John, "Did I ever tell you my favorite color is blue?"  When John snaps awake, everything is indeed blue.  But throughout the movie, the color blue shows up, especially in peoples' eyes.  Has Cane not only been controlling what John sees, but what we see as well?  Possibly.  Something to think about.  I love when movies play outside the sandbox, and Carpenter has never been afraid to do that. 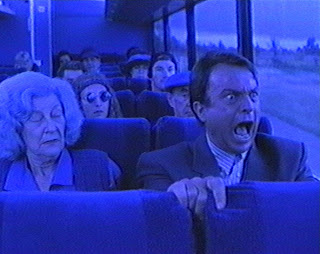 What a fun movie In The Mouth of Madness turns out to be.  It's the third in Carpenter's loose Apocalypse Trilogy and it can be argued that it's the most dire of circumstances - certainly it's the most bleak in terms of ultimate endings.  The little nods to Lovecraft and King are a kick to uncover.  Sam Neill does a fantastic job as a true "omega man," part detective, part skeptic, all victim.  Definitely a great closing to the Apocalypse Trilogy, and a great way to spend a movie-watching evening.

In fact, get a hold of all three movies and watch them back-to-back.  It'll put a little sunshine in your day.