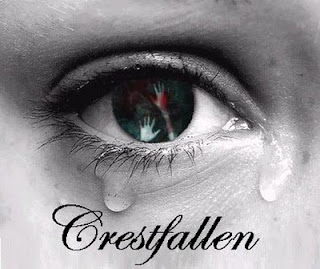 Words are powerful.  No doubt about that.  Sometimes, however, the absence of words can be just as powerful.  The awkward pause, the angry silence, the space between story and punch line.  Your own mind can fill in the words when it encounters a silent narrative, and what that narrative might be trying to tell you could punch you right in the gut.

The short film Crestfallen, a six-minute cautionary tale of a young woman driven to the edge of her life - the edge of a knife - by betrayal and sadness, has no words, no dialogue, nothing shouted or whispered.  The viewer is simply made witness to the young woman's pain, both physical and emotional.  Written and produced by Russ Penning, filmed by Dominick Sivilli, and directed by Jeremiah Kipp, Crestfallen stars Deneen Melody as Lo, the young woman who suffers the titular emotion. 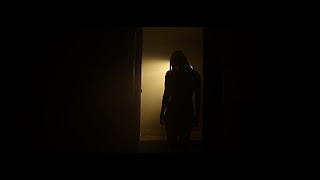 Quite simply, Lo has been betrayed by the love of her life and decides to take her own.  It's not an easy decision, and things may not turn out the way anyone expects as the minutes tick on and the memories flow.  It doesn't take long for the viewer to sympathize with Lo, who glides naked and with an air of dignity into a bathtub.  As the knife runs along her arms, the memories flow with the blood, and not all of them are hurtful.  She reflects on what brought her to this point, and what should keep from doing it.  It's Lo's downward spiral, and we're along for the ride, helpless to do anything but watch. 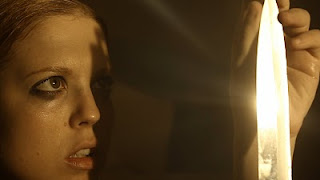 Crestfallen is beautifully shot, directed with a deft hand by Kipp, whose wonderfully surreal short Contact I reviewed last year.  Here's a guy who takes his craft very seriously, and will never be accused of "phoning it in."  Keep an eye out for Kipp; he's headed for big things.  Deneen Melody is the centerpiece of this short film, and is beautiful and effortless in her performance.  We see the hurt in her eyes, the sadness and pain, all without words.  She looks like someone we all might know, someone we would want to help.  That sense of familiarity is strong - I couldn't help thinking she looked just like an old friend of mine, but I couldn't place who.  You want her to be okay, no matter what, and that's brought to life by some fine acting.  The fact that Crestfallen is silent, except for a score, only added to its beauty.  I really am cheering for this film to make a big splash soon. 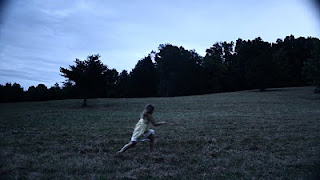 But enough of my words - I was fortunate enough to have both Kipp and Melody answer some questions about Crestfallen and I'd love to share them with you dear readers now.  Let's start with Mr. Jeremiah Kipp, the director:

Was there a specific influence that inspired this narrative (writer, director, etc.)?

"The writer and producer of this film, Russ Penning, based the movie on some rather heavy personal experiences, so that was our primary influence. I thought he was brave to face those demons. My job was to visually interpret his story as best I could, along with my key collaborator, DP/Editor Dominick Sivilli.  Dom tends to downplay his participation, often saying his vision of the project is to shine a light through the window and turn on the smoke machine. But he has a profoundly sensitive and poetic approach to his work. When we shot the suicide scene, he whispered, "This feels like BEOWULF." He was right; we were trying to tell an intimate, personal, character-driven story in an epic and operatic way. Our feelings (love, hate, fear) are as large to us as castles and kings; and suicide and the flood of memories our main character endures should be told in a way that is bold, daring and sincere."

Will we see Crestfallen in some film festivals or contests?
"Russ has an entire festival plan for Crestfallen. With a running time of six minutes, we hope it will fit nicely in a short film program or preceding a feature.  Since it was intended as an anti-suicide film, we hope horror and mainstream festivals and audiences are able to connect with it."
Any projects on the horizon?  Has Crestfallen opened any more doors?
"One of the more immediate doors opened by this project was the opportunity to work with associate producer Marv Blauvelt and his company Muscle Wolf Productions, as well as Chris Jay and Kitsie Duncan of Dark Rider Productions. I cannot say enough about how welcoming and instrumental these Midwestern filmmakers were in making Crestfallen, and it opened a dialogue about more projects we'd like to work on together. As the old saying goes, work begets work. I'm currently editing a "hired gun" horror trailer I recently directed, and start principal photography on a non-genre movie next month starring my old friend Scott Miller and Geoffrey Owens from The Cosby Show. There's also The Sadist starring Tom Savini, which is currently finding its form in post. My producers and I are navigating that path right now. There are a few exciting monster movies in development as well. All we can do is let the future come." 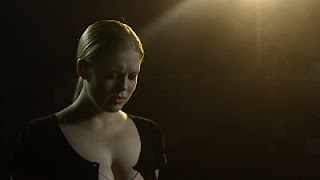 And now I give you Deneen Melody, in her own words:

From where did that intense performance emerge?  Inspirations, motivations?

"I haven't discussed this with many people, but one of the main reasons I wanted to do this film is for a friend of mine. She took her own life a few months before, which absolutely broke my heart. It is such a sad thing when someone, despite the reasons, feels that there isn't any hope...that there is absolutely nothing to fight for."

"That being said, Crestfallen is very personal and was something I wanted to do in a more positive light. Some people may see the movie and feel it is a depressing, which is true, but the end message is a positive one. It shows that no matter how harsh life may be, in the end, there is always something to live for."

"Jeremiah and I didn't have a chance to rehearse before the shoot, due to him being in New York and myself in Chicago, but we had several conversations about the piece. Developing the character with Jeremiah helped bring something more to Lo...she became someone with an entire back story instead of a random woman in a bathtub. It was important to all of us that we create a character that, without anyone having to say a single word, feels for or identifies with."

"They were fantastic, of course! I had already worked with Dominick on a film called Lewis, and we got along very well, so I was familiar with how he works. And while I had never worked with Jeremiah before, we had chatted online and I am a fan. As mentioned above, we didn't have a chance to rehearse anything before we shot the film, but Jeremiah would talk to me in detail about the way he works, so when we were on set, we were able to just jump into the story. Both Jeremiah and Dominick always bring something very unique and visual to their films, and I am honored to have the opportunity to be a part of something so beautifully shot and put together."

"Russ is someone I had met online and he is such a good friend, always super supportive and encouraging towards my career. When we all first started talking about doing this film, I could relate to the personal aspects of the story and understood where Russ was coming from in his writing. I've read some other things he has written since then and he has so much talent. I hope that I can work on another film he writes in the future!"

Any projects on the horizon?  Has Crestfallen opened any more doors?
"I am currently working on a project of my own creation called Rose White. It is a fantasy thriller/crime drama based on the Brothers Grimm story, Snow-White and Rose-Red. I play the role of Lilly (Snow White) and the beautiful Erin Breen stars as my sister, Rosalyn (Rose Red). The film also features Daniel Kuhlman (who is also directing the film along with Brian Kilborn), Tom Lodewyck, and Anthony Fleming. Breakwall Pictures is working in association with TinyCore Pictures (III SLICES OF LIFE) to bring this movie to life!"
"Some other projects I have coming up include Prey to God, Witches Playground, Bloodstruck, Astro Noir, Dark Light, and the dramatic feature film Strawberry Summer. You can keep up with news and updates on all these projects at my Facebook page and website!"

"Crestfallen has opened a door to a more dramatic path, which is something I was looking for and am very thankful to achieve. I really must thank Russ, Jeremiah, and Dominick for believing in my abilities and giving me such a rewarding opportunity!"

And now I must say a HUGE thank you to both Jeremiah Kipp and Deneen Melody for being so nice and taking the time to answer my questions.  Keep an eye out for Crestfallen, and for the talented people involved with this short film.


As for your humble helicopter pilot, I bid you all a healthy "until next time," and don't get too close to the fences...the undead have a hell of a reach.
Posted by Dod at 9:45 PM