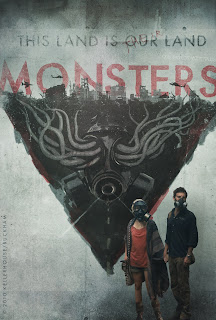 If there's anything I love in the realm of film, it's when filmmakers use every single cent of a tiny budget and make something look like a few million bucks.

Enter 2010's Monsters, written and directed by Gareth Edwards. I knew it was low-budget, but that phrase doesn't scare me away. You can have low-budget that's really bad, but then you have low-budget where it looks like the people involved really went out and tried to make something special. Whether they did or not doesn't really matter, actually. The passion and creativity are there, and that's what important...and maybe leads to bigger and better things.

The story is your basic road story with twists appropriate for the genre. Scoot McNairy and Whitney Able, a real-life couple at the time, play world-weary photographer Andrew Kaulder and Samantha Wynden, daughter of Kaulder's boss, a magazine magnate. Kaulder is tasked with getting Samantha out of Mexico after a disaster destroys her hotel. Oh, and the disaster? A very large, spider-octopus-lookin' thing that could easily have been a star in an H. P. Lovecraft story.

Seems that six years before the movie begins, a probe was sent into space. It crashed back to Earth carrying something...well, many somethings...that grew into these destructive creatures. The new residents of our world are contained in an "infection zone," right about at the border of Mexico and the United States. And, before you start reading political undertones into the movie, Gareth Edwards has stated that there were no such undertones - it's simply where the story is set. So get any political mumbo-jumbo out of your head right away. Some of us watch movies to be entertained, not comb through them for liberal/conservative "secret agendas." Simmer down.

Now, Samantha's dad hired Andrew to get her out of there, but complications arise. Ferries to and from the coast are shutting down due to the creatures' migration patterns. Tickets cost $5000 apiece. Andrew loses Samantha's passport. The only way home is straight through the infected zone.

The film chronicles their journey from the heart of Mexico back home to the United States, and the perils in between. They have several run-ins with the creatures, including one that kills or chases off their armed escort. On their own, and bonding closer and closer along the way, they reach the US of A, only to find the border wall is wide-open, and towns in Texas are being evacuated. They hole up in a gas station and come to terms with their personal lives: Samantha is engaged to someone she doesn't love, and Andrew has a son at home that he loves, but isn't allowed to be his father.

The gas station sequence is really something I enjoyed. Two creatures arrive and after a tense moment, the main characters watch - mesmerized and brimming with emotion - as the two enormous "monsters" communicate and gently caress each other, biological electricity flashing through their bodies in the night. It's a well-done scene, meant to be beautiful, and I imagine I would have the same reaction if I saw something like that at night near my corner gas station. Lucky me, I usually get to see the oblivious schlub picking his nose while he pumps mid-grade. 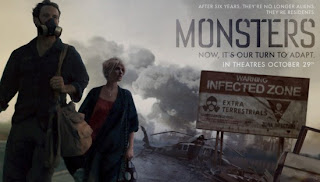 Monsters is very low-key. It's narrative is slow and deliberate, not meant for shocks and thrills. The "monster" scenes are meant to be tense, but it's never jump-out-of-your-seat stuff. The acting is natural, never forced - Andrew and Samantha come across as real, average people. Everyone else is pretty much an extra...seriously. They used people who were right there to play people...um...right there.

I wouldn't call Monsters scary, but I'd call it a damn fine effort in making a low-budget, good-looking film.

Oh, and pay close attention to the very beginning and the very end of the movie. Neat little storytelling device there...

Until next time, fellow survivors, pray our own "border walls" hold - the undead are getting pretty relentless...
Posted by Dod at 11:00 PM