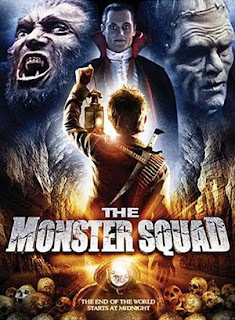 There's that term we're all familiar with as movie fans: "feel good movie." It's usually reserved for inspirational movies mass-produced by Disney or romantic comedies that feature at least one montage showcasing a modern indie ballad. For me, a "feel good movie" is one that gets me to smile, maybe gets me to reminisce a little about good times in my life. 1987 was a good time. I was in college for the first time, at Central Michigan University. I wasn't balancing my studying time versus my partying time very well, but I was in the midst of the heady 80's decade and enjoying my blossoming social life.

1987 was also the year that The Monster Squad came out. I remember seeing it a couple years later, but it must have been late night or right after a party, because I only recalled very small snippets of it. I've been meaning to revisit it for years now, and finally I couldn't wait any longer. Some things age well with time. The Monster Squad is one of them.

Seems 100 years ago, Abraham Van Helsing had one climactic battle with Count Dracula (a hell of a performance by Duncan Regehr) over the fate of the world. During the skirmish, Van Helsing opens up a portal in the hopes that Dracula and his allies of evil will be sucked into a limbo dimension. In the words of the prologue script, he and his good allies "blew it."

Dracula arrives in modern times along with The Gill Man (think Creature of the Black Lagoon), The Mummy, and Frankenstein's Monster (the wonderful Tom Noonan, who plays outright evil in Manhunter and The House of the Devil). He also enlists the help of The Wolf Man (played by Jonathan Gries - Uncle Rico in Napoleon Dynamite - in his human form). His plan: obtain the amulet of concentrated good hidden by Van Helsing so that when the clock strikes midnight, he will be in a position to rule the world.

Enter The Monster Squad. Think The Goonies, but with fouler mouths. Led by Sean (Andre Gower), it's made up of smart-ass Patrick (Robby Kiger), bully target Horace a.k.a. "Fat Kid" (Brent Chalem), youngest member Eugene (Michael Faustino), and newest member, tough kid Rudy (Ryan Lambert, looking like a young Adrian Zmed). Sean's little sister Phoebe tags along, and eventually earns membership in a big way. These guys are convinced that monsters exist, and when Van Helsing's diary falls into Sean's lap, things get dangerous for the club. Dracula sends Frankenstein's Monster after the kids, but the big lug befriends Phoebe and finds himself - for the first time in his artificial life - accepted as a real friend by people who should fear him.

Sean and Patrick enlist the help of "Scary German Guy" (character actor Leonardo Cimino), a neighborhood recluse who the kids all fear, to read the German notes in Van Helsing's diary. Scary German Guy turns out to be a sweet old man who "knows something about monsters," as his concentration camp tattoo reveals. The amulet is vulnerable that very night at midnight, and by destroying it, Dracula will inherit the world. But performing a ritual, read by a virgin, the portal to limbo will open, pulling in all the monsters.

The race is on, as Sean gets his hands on the amulet, but is pursued by Dracula and his remaining evil friends. "Frank" is taken out by a collapsing roof, and Scary German Guy helps speed the getaway. But Dracula terrorizes Sean's family, destroying the clubhouse and blowing up Sean's father's police partner. The climax is one of the most enjoyable portions of the entire movie, a well-choreographed battle in the middle of town. Everybody gets their moment, like Rudy's showdown with Wolf Man and Dracula's brides, and Sean teaming with his father against the aforementioned lycanthrope. But the moment that made me smile belonged to Horace. Desperately seeking a weapon to use against the advancing Gill Man, and getting no help from bullies E.J. (Jason Hervey of The Wonder Years) and Derek (Adam Carl), Horace picks up a shotgun and shakily - but effectively - kills the Gill Man. When E.J. congratulates him, still calling him "Fat Kid," Horace cocks the gun. "My name...is Horace!" 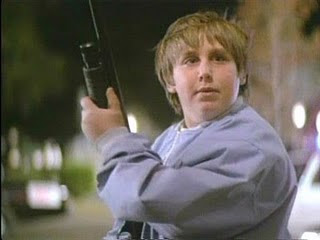 When Plan A goes wrong - having Patrick's older sister who claims to be a virgin read the incantation - the Squad takes a chance by having little Phoebe read it. It works, and the portal opens, taking a still-fighting Dracula with it. Sadly, it also takes Frankenstein's Monster, which brings tears to little Phoebe's eyes. Finally, when the Army arrives - summoned by an innocent note sent by Eugene - the Squad proudly announces their presence. It is they who have defeated the monsters.

Naturally, any movie with kids embarking on a bigger-than-life adventure is going to be compared to The Goonies. There are some similarities, but you won't find two more different movies. The Goonies has no trace of the supernatural, but The Monster Squad is full of magic and monsters. Both movies have characters with distinct traits, but the Squad kids are more streetwise, and aren't afraid to say what's on their mind - tad bit more swearing among those fellas.

The Monster Squad is just damn good fun. The script pops with some real gems, and although the story is basic, it's dressed up in its finest Ray Bans and pastels. These monsters don't fool around, and there is a big body count by the time the battle's done. Director Fred Dekker (Night of the Creeps) moves the film along with a great love for the material, and there are some great quotes in that script by Shane Black and Dekker.

Many of my peers love this movie, and I can very safely say it now comes highly recommended by yours truly. It's going to make a fine addition to my collection when I get a little more cash in my pocket. Good, old-school 80's fun - political correctness be damned in some cases - with a flair for adventure and touches of comedy and warmth. Want a good time? See The Monster Squad right away.

Me? I might hire those kids to take care of my zombie problem.

Stay safe, friends, until next time...and enjoy some clips from this fine flick: