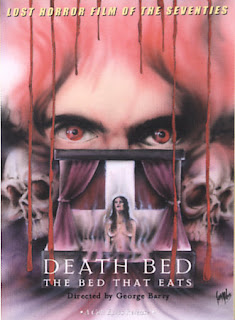 I almost didn't have any words for this movie. At first glance, it appears to be a knowing-wink kind of thing. You know, tongue-in-cheek and full of wry, subtle in-jokes. I mean, a film about a bed. An evil bed that eats people. Why didn't I think of that? Then, I experienced it. And I wished to all that is holy that the trusty crew of Mystery Science Theater 3000 had been there to hold my hand through the syrupy, surreal morsel of oddball that is Death Bed: The Bed That Eats. 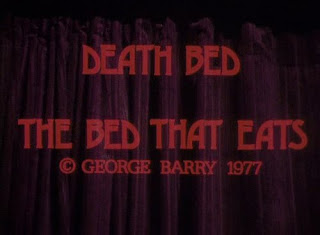 At least we got one of those nifty title cards.
A film that - like its narrator - sat in limbo for about 25 years before its official release in 2003, Death Bed is a strange neo-art-horror-camp-comedy-experimental piece written, produced, directed, and eventually forgotten by George Barry. It gained cult status through pirated videotapes and mentions by comedian Patton Oswalt, the "fame" seemingly a surprise to Barry himself. But, hey, I'd be pleasantly surprised, too, if a film I made then forgot about gained notoriety.

And oh, what a film.

Let me tell you a little something about how it all goes down. The epilogue, or "breakfast" (seriously, a graphic tells us just that), shows an amorous couple sneaking into the tomb-like room where the bed resides. Where the bed is sleeping...and snoring. The ghost of an emo artist is trapped behind one of his own drawings of the bed, and he conveniently narrates the procedures for us. The couple get busy on the bed, which sneaks a bite of their apple, drinks their wine, and...seriously...polishes off their bucket of fried chicken. Then, it moves on to the couple, pulling them into its oddly green pool of digestive juices. We know it's eating them because we hear eating noises. Funny how everything it eats sounds like it's made of apples. 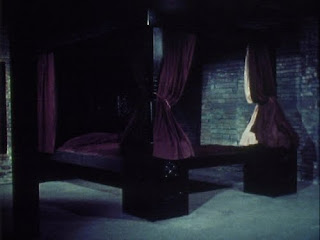 The bed in question.

The narrator fills us in on his relationship with the bed while it dreams of eating people in a city, as told by the ol' spinning newspaper. Several years pass, and a trio of ladies arrive at the house to check it out for a lawyer friend of one of the women. I would say that one, Diane, is headstrong, that another, Sharon, is her good friend, and the last, Suzan, is mousy and insecure. I would say that, but character development and acting aren't around to make it easier. Suzan is left alone to get some rest, but falls victim to the bed. The others discover her missing, and the bed reacts harshly to the presence of Sharon. When the ladies leave to look for their friend, the bed pulls in Suzan's suitcase and yes...wait for it...drinks the Pepto-Bismol. 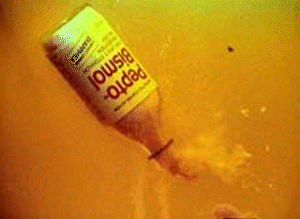 Yes. The bed that drinks Pepto-Bismol.

A lot of the bed's history is revealed, especially that it had multiple owners, including a gangster (whose gun sounds like it's firing, but looks like a toy), a "sexual therpist" whose orgy kept the bed full for a long time, and the artist himself, who had consumption, which he theorizes is why the bed "rejected" him. The bed's origin ties in with why it is so affected by Sharon. Seems a woman was seduced by a demon who created the bed, but died. In his strange grief, the demon cried blood and the tears possessed the bed. Sharon has eyes just like that woman, who lies in perfect shape in her grave on the property. Yep, you heard all that right. 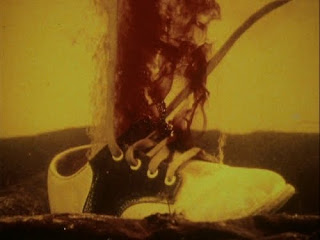 One of the random objects the bed likes to snack upon.

When Sharon goes for help, Diane decides on a nap. After a bizarre dream, she tries to get up, but is pulled in by the bed. She is able to escape, but her bloody legs are useless. And thus begins one of the longest several minutes you will ever experience. Diane drags herself to the door, and we are there to witness every last second of it. A sloth on Robitussin would've lapped this scene twice before it ended. The bed pulls a "haha, psych" and pulls Diane back with a well-tossed bedsheet. Sharon returns just in time to see this happen, and her mind goes bye-bye. 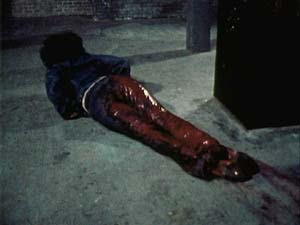 Through this whole movie, 70's singer Leo Sayer Sharon's unnamed brother searches for and eventually finds Sharon curled up in the bed's room, afraid to leave and probably hearing calliope music in her mushy mind. The bed taunts them with strange sounds and random eyeballs, leading the brother to attempt stabbing the bed. In my favorite scene of this thing, the bed spits the knife out and consumes everything but the bones of the guy's hands. When he settles down to stare at his hands, his reaction is...well...underwhelming. Almost as if he were to say, "Huh. Skeleton hands." 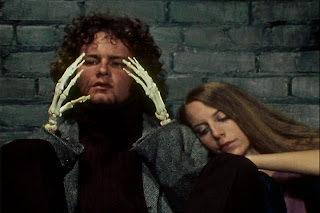 "That's strange. Skeleton hands. Hm. Did I leave the stove on?"

That was the best. Well, moving on, the artist had said when the original demon sleeps every ten years, the bed will be vulnerable. He instructs Sharon to build a ritual circle to transport the bed to another circle, which will also awaken the bed's original "mother." Sharon must die for this to happen, though. The re-animated woman then "couples" with the handless brother to close the circle and the bed is destroyed.

What a ride. Like trying to race a Hoveround on its lowest setting through mud. The pacing of this movie only moved due the advancement of time, not any plot or acting. Every second of that slow time that passed, I could hear Crow T. Robot in my head, lampooning each scene. It was the only way I could maintain my sanity, and there's very little of that left. Still, the film has just enough charm to become something of a more recent Rocky Horror Picture Show. Somebody out there, please make that happen.

Until next time, folks, sleep comfortably on your beds tonight and have as much fried chicken, wine, and apples you want.
Posted by Dod at 7:18 PM