The Den (2013) Always Look Both Ways When Crossing The Internet 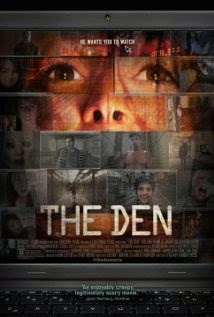 You know how the Internet is a place where good people can get in touch with other good people and talk about good, innocent things and respect each others' opinions and lives?

Well, 2013's The Den features the complete opposite side of that dream Internet.  In fact, if you want to teach a lesson about being safe online, this would practically be a documentary.  With the wackiness of sites like Chatroulette and Omegle, you just never know what you're going to get in the online box of cyber-chocolate.  The Den says, "okay, let's show you what happens when you pierce the dark underbelly.  Hire a maid because things are about to get messed up." 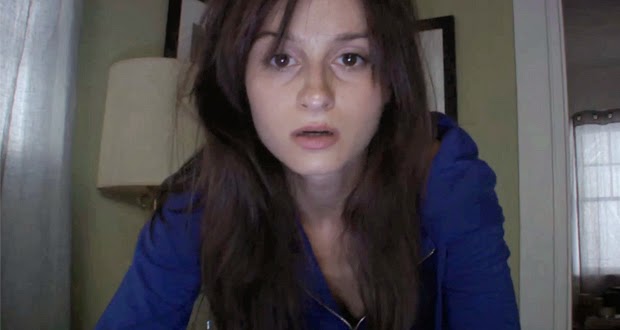 It's a pretty straightforward story at first:  doctorate student Elizabeth (Melanie Papalia) sets up an account on a website called The Den in order to study how humans interact when given freedom online.  The results are predictably unpredictable.  Along with friendly people, she meets oddballs, wannabes, and perverts.  One girl, who won't turn on her camera, sends her cryptic messages as well as threats to her friend who is sharing the computer one day.  Strange things happen on Elizabeth's computer as it become clear that she's been hacked, although she doesn't see it at first.  It's when she witnesses the apparent murder of the formerly camera-less girl that things take a swan dive into the crazy pool.  From there, it becomes a fascinating and frustrating mystery for Elizabeth to solve...if she should.

Did I mention the entire movie is filmed as video feeds from various sources like Elizabeth's computer or surveillance cameras?

It's an interesting and intense take on the rapidly-filling-to-capacity found footage genre.  It moves along quickly and with enough of a variety of video sources to keep the narrative fresh.  Director Zachary Donahue, who also wrote the film, turns in a fine example of thinking a little outside the box and didn't go the "we're making a documentary" route.  Papalia is outstanding as a curious then utterly frightened Elizabeth, bringing range and charisma to the role.  Essentially, she is quite often a one-woman show who's only required to react to what she sees on a screen in many scenes.  In an era when so many people are exposed on the web - figuratively and literally - this is an urban legend of our time.  What if you're being watched?  What if things are happening without your knowledge?  What if?

It's a crazy movie.  I remember thinking, "That was messed up" as the credits rolled.  Truth be told, "messed" wasn't the actual word I used, but modesty prevails.  After a spate of so-so films that I haven't reviewed yet, The Den was rather refreshing.

Surf safe, everyone - until next time, here's the trailer: