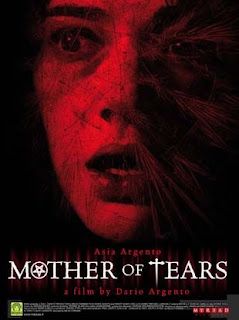 I was really rooting for this movie. Honestly, I really was. Mother of Tears has a tremendous pedgiree: it's the final chapter in a trilogy that put director Dario Argento in the pantheon of legendary directors. It should been the climax of the trilogy that started with 1977's Suspiria and continued with 1980's Inferno. But it seemed like a modern shadow, a ghost dressed up in sparkly 21st century clothes. The previous two had something about them; an atmosphere or a "feeling." Mother of Tears left me feeling like I'd seen a pretty good modern movie about a powerful, evil witch, but didn't leave me feeling like I'd experienced it.


Sarah Mandy (Asia Argento) aids in the investigation of a strange box dug up in a graveyard in a small Italian villa. The box contains several items connected to a powerful witch known as Mater Lachrymarum or Mother of Tears. She is reputed to be the last survivor of a trio of witches called The Three Mothers. In Suspiria, we met Mater Suspiriorum and in Inferno, we met Mater Tenebrarum. If you've seen those movies, you know how those two panned out. Mater Lachrymarum, however, is the most powerful of the three. When the box is opened, demons and the Mother of Tears herself descend on the poor woman helping Sarah, and she dies a rather grotesque death. Sarah escapes the demons, the Mother, and the most adorable evil monkey ever thanks to the disembodied voice of what she later finds out is her own mother, a white witch of considerable power.

Much like the other films, from here on out, disaster follows Sarah wherever she goes. The son of her boyfriend is kidnapped and well...let's just say he doesn't make it. Rome falls into a state of chaos, with people randomly committing acts of mayhem and murder. Sarah is pursued by the police, who think she murdered her poor friend at the museum. Sarah's boyfriend - the one with the missing son - runs afoul of some of the young witches gathering in Rome to celebrate Mater Lachrymarum's rise.

Sarah takes a train to meet with an experienced exorcist (Udo Kier), but that trip is fraught with craziness. Several arriving witches and the police chase down Sarah, who is told by her mother's disembodied voice that she has the ability to turn invisible. Pulling a Harry Potter, Sarah escapes the police, but ends up brutally smashing a witches head in a bathroom door.

The priest tries to help, but the infection of insanity has spread to his door. His assistant goes on a mini-killing spree, taking out her own son and the priest before offing herself. Sarah and Marta, a visiting psychic who provides a lot of answers about Sarah's past, escape the compound, but just barely. Marta invites Sarah to stick around, but pretty soon the cute little monkey familiar shows up with magical wacko. Sarah runs outside and tries to call Marta and her lover, but they are dispatched with horrible gusto.

Sarah runs into her lover, Michael, but he's too far gone, having been killed and reanimated for the Mother's purposes. Sarah gets away, thanks to the Jedi apparition of her helpful mom. Sarah then seeks out the help of a powerful alchemist, who gives her a copy of the book, The Three Mothers. If you recall in Inferno, that book is trouble. But it does help Sarah uncover some of the clues as to where the Mother of Tears is hiding out: an old mansion in Rome designed for her by the alchemical architect Verelli, the man who designed the dance school in Suspiria and the apartment building in Inferno.

Sarah heads deep into the catacombs below the mansion - a running theme through the three movies, that the protagonists must face the evil in subterranean surroundings. With the help of the policeman in charge of her pursuit, Sarah confronts the Mother of Tears in a short battle that ends much like the first two movies. You could say it's a tried and true ending, but in keeping with the symbolism of the number 3, this Mater is taken out in a very similar way with very similar surroundings.
There were some good things about the movie, I can say. Asia Argento is easy on the eyes, so I'll get that out of the way first. Delving deeper, the connection to the previous two movies is made quite clear in such a way that you don't have to have seen the first movies (you should anyway) to get what's happening in this one. The heroine of Suspiria is mentioned by name, and the buildings where the first two witches lived are illustrated in The Three Mothers as a bit of nostalgia. A reason is also given for Mater Suspiriorum's relatively easy defeat as well, and her role in Sarah's life brings it full circle.

But what's missing are the things that made the first two movies so special to me. The color palette I loved so much isn't there. It looks good, but it doesn't have that emphasis on moody color - the stark and rich reds and blues - the first two movies have. And where's that crushing atmosphere? The one where, even in open spaces, there's a feeling of being trapped or crushed or boxed in. The heavy atmosphere that no matter what the hero did, you really weren't quite sure if they'd make it because hey, the evil they're facing is just so freakin' strong.

There weren't any cats in this movie - a good thing for cat lovers, given their role in this trilogy - but monkey fans will find their hearts stolen by this little guy: 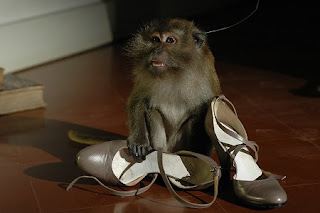 I really wanted to love this movie, but it gets a lukewarm "OK" from me. That's my opinion. Compared to a lot of modern attempts at artsy horror, it did hold up fairly well. In most circumstances, it's unfair to hold a film up to its predecessors, but the way I see it is that it's part of a high-profile trilogy by a hugely renowned director.

Nobody's perfect, though. And I still love Argento's work.

Until next time, fellow survivors, remember that a monkey helper is nice, but they might betray you to a powerful witch, so keep that in mind.
Posted by Dod at 6:12 PM