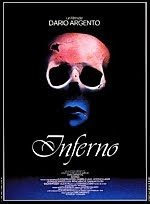 Watching a good Dario Argento horror movie is like a big colorful funhouse. Some of the images thrown at you are ridiculous and scary at the same time in a way that is entirely unique and never boring. A lot of people hold Argento in high regard, and it's no surprise he's one of the fathers of modern suspense and horror - well, the good parts of it, anyway.

Starting with 1977's Suspiria, Argento set out to tell the story of The Three Mothers, three immensely powerful witches hidden throughout the world, manipulating reality. He would begin with the aforementioned Suspiria and finish it with 2007's Mother of Tears. Bridging the gap would be 1980's Inferno. Where Suspiria introduced the Mother of Sighs, Inferno brought us the Mother of Darkness and despite all the darkness in the film - nearly the entire film takes place at night - there are rich palettes of color throughout, something I always find to be a treat in Argento's films. 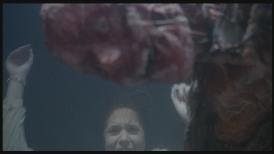 The story finds an old book, The Three Mothers, falling into the hands of Rose, who thinks she may be living in one of the witches' houses as described in the book by an architect named Varelli. Rose sends a letter about it to her brother, Mark, then descends into the basement to investigate. She finds a hidden underwater room containing a portrait titled "Mater Tenebrarum" (Mother of Darkness) and is startled by the surprise howdy-do by a rotting corpse. She escapes, but already, the eyes of evil are upon her - somebody's watching the girl. In Rome, Mark reads the letter from his sister, then is distracted by a smokin' fellow student holding a cat and practicing a silent charm like Snape in the first Harry Potter movie: 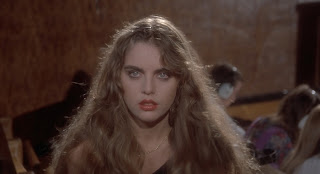 Hubba-hubba. Wait...did you just curse me?
The woman - who is quite possibly the third Mother, the Mother of Tears - disappears and Mark wanders off to search for her, leaving the letter behind. Inquisitive friend Sara reads the letter and stops off at a local library to further her research of The Three Mothers. She gets lost in the bizarre basement of the library before escaping back to her apartment, where she asks a fellow tenant to stick around and keep her company. He's thinking, "Sweet. Score!" until right about the time he gets a knife through his neck. Sara doesn't get too far before she's murdered as well.

Mark starts putting pieces together and attempts to get a hold of his sister, but neither he nor Rose can hear each other on the phone. Rose is then pursued by some mysterious figures and gets repeated shots of a glass panel against the throat for her troubles. Seriously, that book...just steer clear of it.

Mark arrives and finds that Rose has disappeared. In the meantime, he meets several of Rose's neighbors, including elderly Professor Arnold and his nurse, the Countess Elise, and the book store owner who sold Rose the book in the first place, the detestable Kazanian (the guy likes to drown cats, so yeah, detestable). Mark gets all fainty when he finds some blood spots and is set upon by a shrouded figure, which turns its attention to Elise, who is watching from a window. Elise runs, but is attacked by SUDDEN CATS* before she's stabbed.

The nurse and the building's caretaker take care of Mark until he decides he's with-it enough to ask Kazanian some questions. The book proprietor remains tight-lipped about Rose and Mark gets nothing. Later that night, during one of his gleeful cat-drowning sessions, Kazanian is attacked by rats and a possessed hot dog vendor in the park. At this point, I began to wonder if the evil was truly evil for offing the sadistic Kazanian.

People continue to drop like flies as a butler is terminated, and the caretaker inadvertently causes a fire and falls to her death. Mark, much like Suzy in Suspiria, explores deep into the bowels of the building where he uncovers some shocking truths about the building and about the tenants he meets. I won't spoil it here, but it's safe to say he meets Mater Tenebrarum.

Like many of Argento's movies, Inferno is beautifully shot and framed with meticulous care. Angles and colors play important parts; the way the blues and the reds stand out, as well as how a hallway or a sidewalk scene is shot. I don't know if I'm the only one who feels this way, but I'm going to take a stab - no pun intended - in the dark here. Inferno has a "claustrophobia in open spaces" feeling to me. I don't really mean "agoraphobic," I mean it manages to create a weight even in scenes shot in large rooms or outside. This bizarre world crushes down on Mark, and in turn, us. There's no escape for anyone who's even remotely associated with The Three Mothers. I don't know...I just got that sense of every angle of every area as unforgiving or heavy. I liked it. Just goes hand-in-hand with how Argento conducts a movie.

So that's two of the three "Three Mothers" movies down, one to go in Mother of Tears. We'll get to that crazy bridge when we get to it. Until then, survivors, if you see that accursed book in your local antique book store, run like the wind, I tell you. Run. Wind.

*It's actually a sudden swarm of angry cats, but SUDDEN CATS is more fun to say.
Posted by Dod at 9:36 PM